If you look at old maps of Glacier National Park you see that 80 years ago there were many more miles of trail than the ~700 the park currently maintains.  Particularly in the North Fork, all the trails which used to run north-south midway between the river and the mountains have been unmaintained for half a century.  I wanted to go see what, if anything, was left of the old West Lakes system on the ground. 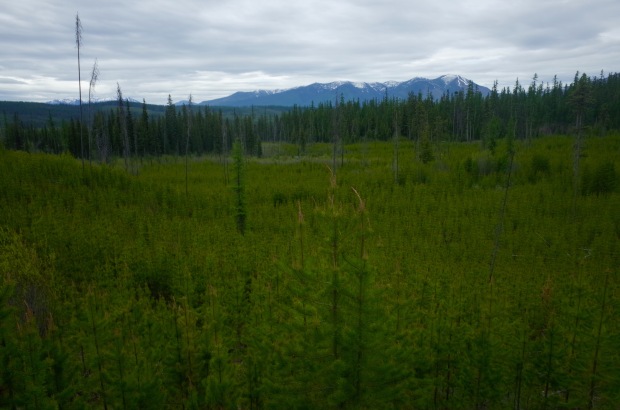 The answer is, nothing that I could see.  Nothing whatsoever.  Terrain and finite time limited the extent and precision of my travel, but plenty of time I knew, due to terrain and my altimeter, that I was standing exactly where the maps said the trail had been.  I saw no saw-cut logs, no blazes, no metal tags on old trees like larches and ponderosas, which tend to persist through the sort of intense fires which have burned the area, just nothing at all left of the hand of man, and of the horse packers who so thoroughly shaped the early park. 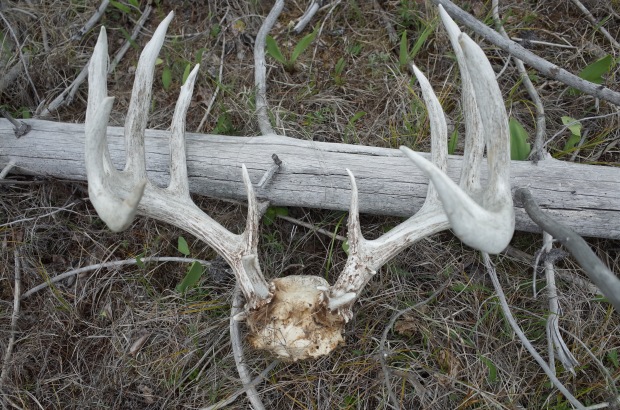 I didn’t see much wildlife either; plenty of tree and ground squirrels, a few ducks and loons, and some whitetail deer.  Indirect evidence of large mammals was omnipresent, particularly moose scat and deer tracks, as well as the skulls of two massive, dead whitetail deer.

What I did see was trees, endless variations of trees.  The first big push, from the trail below lower Quartz over to Logging Lake, gave me a solid mile or more of doghair lodgepole regrowth, pine thickets 12 feet tall, with trees a little over an inch in diameter and rarely further than a foot apart.  The same stretch also showed me dense climax forest on a steep hillside, well into disrepair, each casualty running its course, falling to the ground, and being masked in memorium by shrubbery.  I felt like a tick negotiating a mammoths back, on a world too big to see the other side, and averaged one mile per hour.

The next stretch, from the far shore of Logging Lake to the still-maintained trail up Dutch Creek, was far more heterogenous, and even now, writing the day of, is in intensity and diversity hard to recall.  I remember the woods out of the lake being so thick I got suckered too far west, and gained an extra 500 feet of elevation because of bearing drift.  I recall dropping a little to follow a prominent open patch, only to find that moist bench thick with Devil’s Club only just leafing out.  I recall a subtle lateral moraine near Anaconda Creek, whose stony soil refused to let trees grow too close together and provided faster walking.  And I recall the game trail which led up to the saddle above Dutch Creek, only to fall into nothingness in the incongruous mix of bog and old growth on the far side. 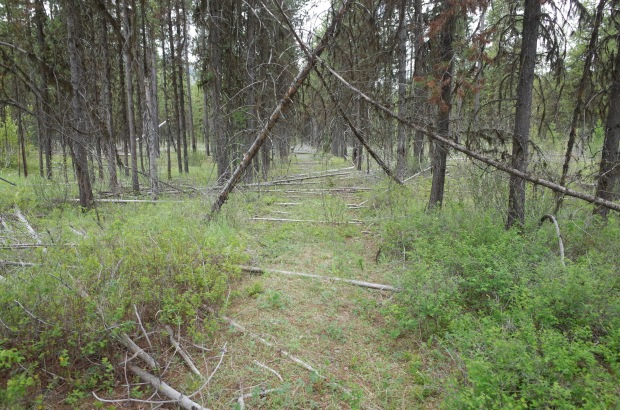 I reached the Dutch trail at noon exactly, having averaged nearly two miles per hour all the way from Logging.  A figure which still does not make sense.  It was obvious that the final push, over to Camas Creek, would consist primarily of doghair regrowth.  It was equally obvious that I couldn’t expect to find trail remnants, or with a few specific exceptions game trails.  Plenty of elk, deer, moose, and bears moved through the whole area, but entire lush valleys were saturated with food, and provided little reason to travel in regular patterns.  So I turned south, enjoyed some easy trail miles, then cut off the dirt Inside North Fork road and followed the old wagon road down Dutch Creek to the confluence with Camas Creek.  The traces of this road are still obvious on satellite photos, and provided an expedient way to floatable water, and eventually, pavement.

Four years ago in Alaska un-trailed terrain on a vastly vaster scale frightened me in a deep, animal manner.  Outside winter, that simply does not exist in the lower 48, but there are a lot of patches, less absolutely remote but still quite wild, that hide right next to the obvious.  What if we didn’t have trails?  What if hiking and backpacking was always like this?  It’d be slower, and demand a lot, lot more from your ankles, but the toe-watching drudgery of tired minds trying to find one forest different from the next at the end of the day would no longer be of concern.

I’m not sure I’ll be back, not on this route anyway, but hiking the missing pieces, from Dutch to Camas and then from Akokala north to Kintla, that is something to think about.