The family is back in Montana, and a mostly sleepness night and a whole lot of box lifting the past few days can’t blunt how good it feels. 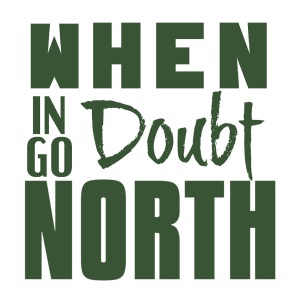 To celebrate, the Go North sticker is on sale today only, cuz duh.  South-southeast is the worst direction ever.

M and I have moved a lot in the last 13.5 years, though by current standards the first four or five were so simple as to just not count.  10 years and 11 months ago, for instance, we moved from Ohio to Arizona in one Xterra load, with three bikes and a waterproof duffle on the roof.  A little over two years later that same Xterra took us north to Missoula, full, while towing squeaky the UHaul trailer, who reduced us to 35 mph in the shoulder going over the pass from Idaho into Montana.  Even though we had a lot more to move this time, maturity and perspective (and massive help from all of LB’s grandparents) made it seem easier, even if the loading and unloading processes took far longer.

One of the benefits of moving between states twice in six months has been being forced, twice, to examine all the stuff we’ve accumulated by chance and choice.  Some of the answers to that introspection have given pause, but mostly they’ve evoked the best sort of nostalgia, which is vindicating.  There is little to regret in the last 14 years.

Being here, back in Montana, certainly doesn’t seem like it will be one of them.  My new day job promises to be the most challenging I’ve had, but at some point in the next few weeks regularly scheduling programing will return.

Cultural critique, N.O.S.
← You are all going to die
→ Preserving the preserver

5 responses to “We made it”