I was tired enough that looking elsewhere lacked appeal, and sleeping atop elk scat must be good luck so I suspended tarp corners from branches and rocks, rolled out my stamp of Ridgerest, and laid down.  Even at 6500′ it was far too warm to be in a sleeping bag, and after I eventually fell asleep in just a shirt and pants the cold on my bare feet and head didn’t wake me up until 2am.  There were plenty of reasons to stay awake.  The warm uphill breeze was stout and every tenth puff smelled of wood fire.  Likely enough from the huge fires north of Lincoln, burning up the southern toe of the Bob Marshall 50 miles to the northwest, but maybe an illegal fire or ill-timed spark had set a blaze that would in the night burn through the trailhead, torch the van, and leave me sprinting up the ridge and down the other side.

My three tree island was an almost flat spot in a grassy meadow pitched 30 degrees across, surrounded by thickets of 8 foot tall lodgepoles.  Elk trails were the only easy way in or out, and those threaded through the dog-hair thick saplings, cruel to humans and a monument to the agility of 500 pound mammals.  But the real reason I was awake was the two bulls, glowing tan spots against the seeping darkness, which I had seen over on the northern edge, too late for action.  My retreat to a flat, and I hoped discrete, spot could have almost been accomplished hoping elk bed to elk bed, tamped down ovals 4 feet wide in the brittle grass.  With no rain of consequence for months aging such sign was impossible, but I had plenty of hope, and plenty of nerves about how to put possibility into action, and that insecurity does not make for easy sleep. 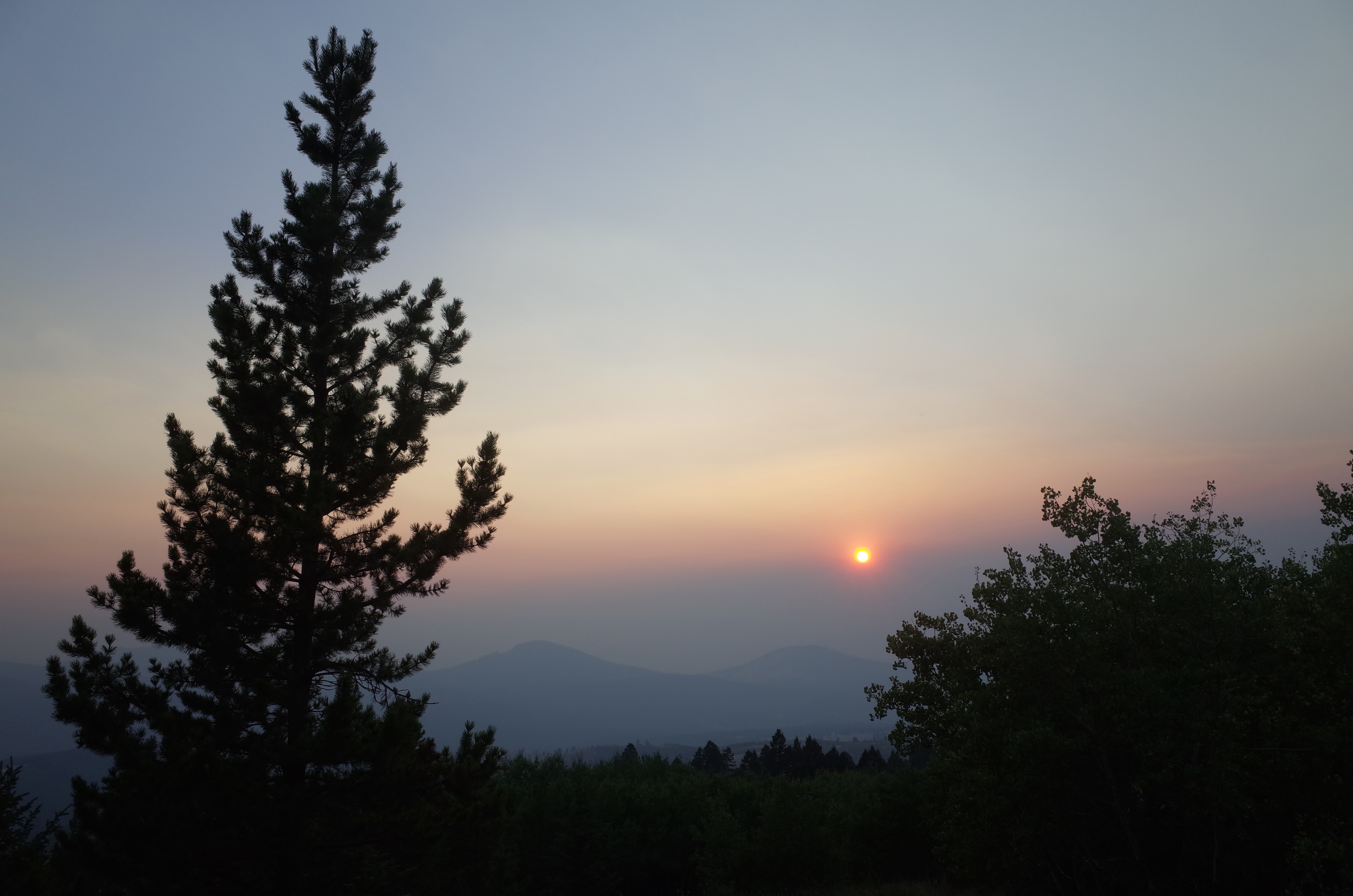 My highest ideal in hunting is to show up to place for the first time, and with minimal advance knowledge and map scouting track down and kill your target animal.  It’s an approach which gets modern trophy hunting somewhat backwards; with minimal specific knowledge I’m generally picking a location and taking the first legal animal I happen to find, rather than filtering via the size of antlers or body and going where those few creatures live.  On a handful of occasions it has worked perfectly, or as perfectly as human circumstance will ever allow, but most often I end up doing a lot of walking and a lot of sitting and seeing not much in the way of critters at all.  Which is why those bulls were a victory just by themselves.  Elk are incidentally crafty compared to deer, their herd instinct makes them a lot harder to find without more experience than I currently possess, or the kind of knowledge I generally try to avoid.  Add the few deer, whitetail and mule, I saw over the two days, one of which I came perilously close to putting an arrow in, and the two moose for a very good trip indeed.

Being in the right place and right time to see animals makes you feel like you are doing the right things, even if it is most or all down to luck.  The morning after my elk sighting I struck out, sitting the meadow at dawn did no good, creeping the ridge to intercept them between water and bed did no good, and as usual slow but not slow enough walking down the old road (I needed water, badly) did no good.  What did do good was sitting in the open 50 yards from the fenced spring, after fishing some surprisingly good water out of the hole surrounded with elk and deer tracks, and glassing while sipping coffee.  A deer in a meadow 800 yards below stood out, immediately.  It’s good to pay attention to what the animals are doing when you’re planning a stalk, so the does startled glance to the left was to my eyes immediate.  The big dark mass was not a moo-cow, thankfully, but a bull moose.  Whose photo I later got at 300 yards through my spotter (11x magnification). It wasn’t that moose that blew my stalk on the deer, but the other moose, the cow it had been courting.  I though the crashing in the aspens would combine with the doe running spastically in circles would let me close from 100 to 40 with plenty of cover, and I still believe it was the thrashing and bellowing meese that sent the deer running, rather than my false stealth.  But I’ll never have proof of that, just all four deer varietals seen on one trip, and no meat to bring home, on a too smokey and too hot September weekend.

Backpacking, Hunting
← Understanding the Sperry fire
→ Hunters, Get a tripod