The last year of college Andy and I lived in a four room apartment carved out of the second story of an old house a few blocks from campus.  The staircase to our carpeted kitchen was steep and creaked, tacked on to the back, an afterthought for money. I first took the second, and slightly larger, of two front rooms as mine, but after a few months we built the climbing wall there and I moved into our smallest room.  Built on the other side of a capped staircase, and entry door was 5 feet tall.  At the time it seemed an amusement, and I don’t think I hit my head too often.

I’m not sure what we did with the couch that came to sit opposite the climbing wall in what became the public room, but I do know that when M helped me purge that room of it’s many beer bottles we found a intact wine glass, missing for months, within the cushions.  That glass might have burrowed away one fateful winter night when Andy, Kate and I sat around, having graduated from our bouldering in short order to drinking and giving me shit about my dating habits.  This was a rich subject, starting off that night with the profusion of Rachels and Rebeccas who had lately graced my life.  In my defense, these were the two most common names of any gender at Grinnell during the early 00s, by a wide margin.  The friendly excoriation escalated, as my distant memory etches it, to mocking my phallogocentric preferences in girlfriends, specifically an apparent preference for women whose head circumference was greater than that of their waist.  This led Andy to recall a woman in one of her classes, newly transferred in, who fit this criteria and to whom I should naturally be introduced.

The rest is fate, that evening being about 16.25 years ago, with M (the mysterious transfer student in question) and I looking forward to our 16th wedding anniversary this fall.

Those details are for another time.  Today is for the awkward, brittle analogy I am trying to pull between meeting and then getting to know (Andy reportedly did not, at first glance, sell me well as a hypothetical romantic interest) my life partner during the five months our lives had the potential to overlap, and moving north to the Flathead Valley in the autumn of 2010, new packraft in tow.

Fate, that is to say, is circumstances and coincidence meeting desire and action.  Little happens without all four.  M and I were ready for each other, or at least ready enough, and able to conceive of and thus jump on becoming forever for each other.  9 years ago packrafts were a few years away from getting really good, and moderately popular.  There were enough reports of the South Fork of the Flathead to hint emphatically, to the observant, just how much might be available out in the Crown of the Continent.  Commitment can be an object of reconsideration and therefore of doubt, or when it comes as desire and possibility collapsing into each other you ride their mutual apprehension like the burbling eddy line where Youngs and Danaher come together, tiny waves sawbacked in miniature and dwarfed into irrelevance by cliffs flanking trees an uncomfortable necks reach above.  The shadow between reality and motion here is the nothingness of high noon; or of a headlamp in the middle of a flat new moon midnight.

I was also in the right place, at the right time, to explore virtually all of the Crown ecosystem for packrafting with fresh eyes.  I spent seeing no one else on the rivers and creeks save those I brought along, and was able to walk my learning how to float, scout, and manage risk and ambiguity in tandem with taking what started as blank map with a few threads of knowledge strung across, and color the blank nearly as known as not, by the end.

These, love and discovery, are two things I’ve avoided writing on, for over a decade.  The fear of failure, of poor evocation and felicity, makes for high consequences when the things in question are foundational to one’s existence, especially when the distance of memory renders re-evocation more potent with each passing month.  If I can rewrite the memory, and thus the existence, of these few great things of my life thus far, maybe I could erase me as I know it today entirely.  This morning, when the shadow between existence and essence is in the eyes of middle age as long and stark and detailed as a late June evening on an 8,000′ ridge, the peril which lives under my comfortable chair is rank.

Perhaps next week I will write the story of our wedding.  Of proposing, just past dark, on the westbound off-ramp where 10 goes north from I-70, driving to Las Vegas, then promising each to ourselves 17 hours later.  I’m scared of doing violence to the blank spaces, around which life has drawn lines for a decade and a half, and doubtful most poignantly of my ability to evoke their depth under any light.  Knowing the length of languages failure is less violent of existence itself when M and I were there together.

No one was with me in August of 2011 (or was it 2012?) when I dropped off the Continental Divide and surfed scree down to the lakes which distance would suggest births Nyack Creek.  Those ponds are a lie.  Their limits are somewhat defined by gravely banks, but over half of their functional existence is the willow bogs which seep in, holding much water whose scale cannot be assessed from the ridge above, and often not from a few feet away.  Ankle deep, or hip deep?  The only way to know is to be there yourself.

The day and a half which followed remains scared into blankness.  Shallow gravel bars, deep, clear runs with bull trout streaking, endless spruce portages, abandoned meanders promising an easy portage vanishing into the bush, and most vividly, the gorges.  Packrafters of what is now the old school recall well the bouyant acceleration of the stubby boats, their ease and scattered control in steep water an ideal mirror for exploration made vivid and potent as much by ignorance as novelty.  Those first years I was learning fast, in an immersive, submersive way, where your subconscious drinks beyond the limits of your digestive or circulatory system, and you hope that time and distance and rumination will eventually recapture the important parts.  Back then I swore I’d never tell anyone about picking my way down the cruxes in Nyack, chutes followed by wild bandersnatches at the very edge of swimming, grasping fingers into moss to eddy out, pack-on-back portages downclimbing rotten rock with my boat dangling via tether, the fingers of spruce atop the falls, not far above, promising relief and a short bushwack to the trail.  Relief from fear, and from the desire which had me there in the first place, and which kept me at creek level, no matter how slow and how little like boating it often seemed, all the way down.

There is no way to do that twice, with no knowledge of what was to come, if it would go in a way my ability found intelligible, and little enough experience to provide the soothing of context.  That summer and fall pushed me into the project that became this book, one whose scale of exploration I never expect to equal, and whose existence still makes me uneasy.  Even today there is an indiscretion to having written about, and consistently selling (of all things), the knowledge which came out of those experiences.  Not only am I shortcutting others from the most precious times I had exploring, I’m hinting at intimacy of a depth that makes the moments inappropriate for public consumption.  If I wouldn’t seek to share the singularity of seeing M, now as my wife, for the first time, why would I detail at painstaking length moments of equal ineffability? We both know the answer to that, which is similar to the reason I still, in new ranges, go out searching for new creeks.  But after two years in a new and drier environment I’m still learning the rhythms.  By 2014 I could look at a line on the map in the Crown Complex and have a rarely too fallible estimate of what I’d find.  Around here, in the Big and Little Belts and Elkhorns and semi-named ranges, all of which are not so far from the Bob, I’ve felt that making my acquaintance has not gone so well.  Rachels and Rebeccas.

Take the creek pictured above and below, plainly not only not really floatable, even with maximal water.  It drains a truly big area of high ridges and despite being ominously named the Dry Fork of a major nearby river on older maps, I thought it all but a lock for a good outing.

Which it was, but apart from a half-mile exercise in hopeless optimism, my boat stayed in my pack.

This creek, and the days of hiking in, down, around, and back over and out which for me defined it, were familiar well past comforting in every way save the volume of water in a drainage of that size.  Ridgetop view spilled up from vast spreads of evergreens, vertigo-inducing in their uncountability.  A trail, well defined by decades of use, but chunky and grassy for infrequent visits from heavy-footed humans, crossed and crossed the creek again to stay with the subtle flatness of each inside bend.  The dark climb out was fall line and slow, as trails of a certain age tend to be, and faded into nothing along that just flat enough spot short of the quest, where transverse elk trails were so profuse that holding to anything other than the big picture for navigation was a waste of thought.

I still got off route in my myopia, and hand to handrail along the top of the cliffs to find a reliable drop back down.  Camp was under the arms of a cottonwood, a house with everything within arms reach; good firewood wrapped around the trunk to dry, and a torso-sized patch of moss between 3 pound cobbles.  Waking early to the early June Montana sun, almost as early as the early birds, seemed like a kiss before consciousness had fully came back into my eyes. 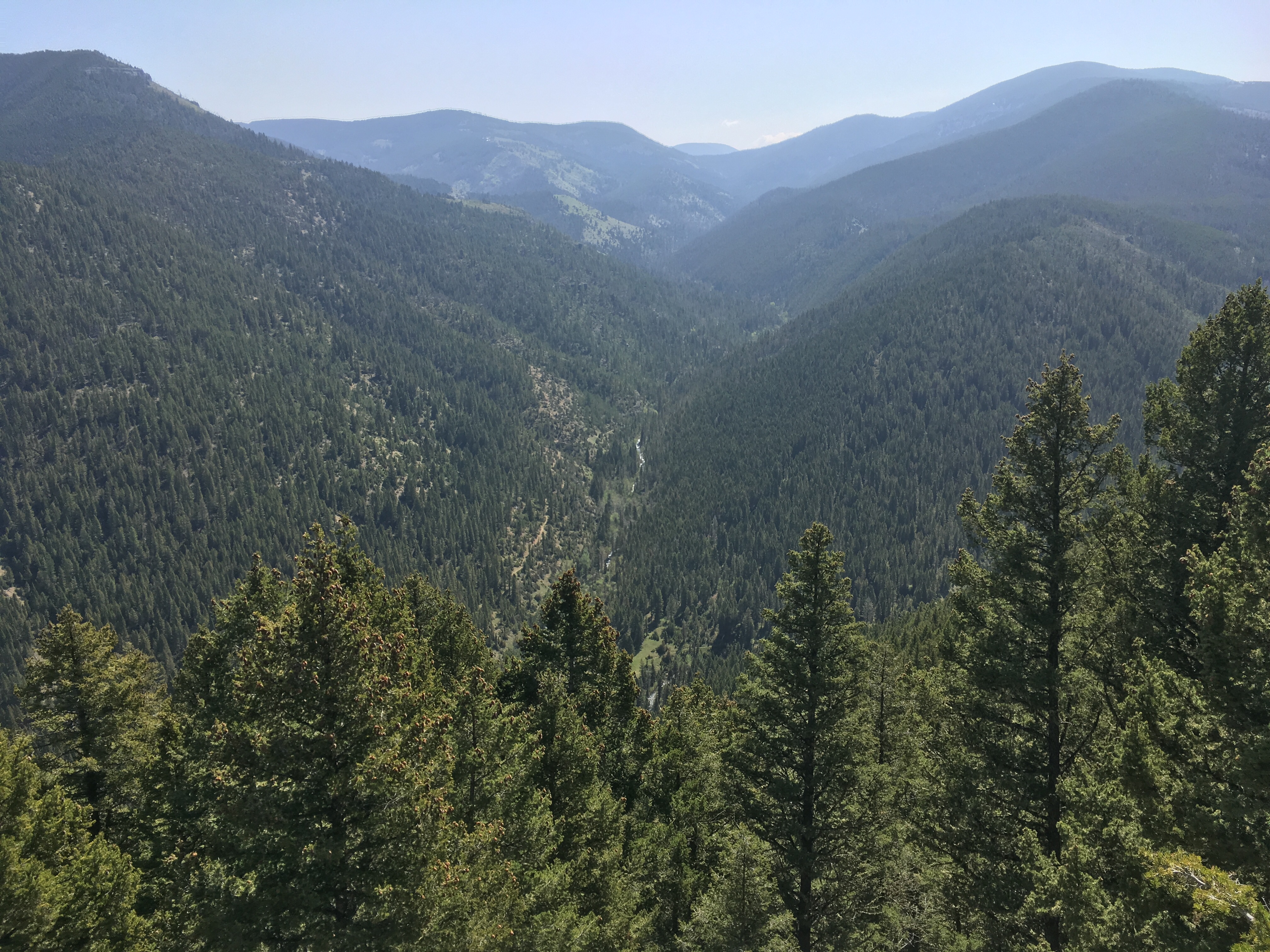 Like with many important things, the rules stayed the same, setting to setting.

One response to “Small, too small”