The ordinary, the extraordinary 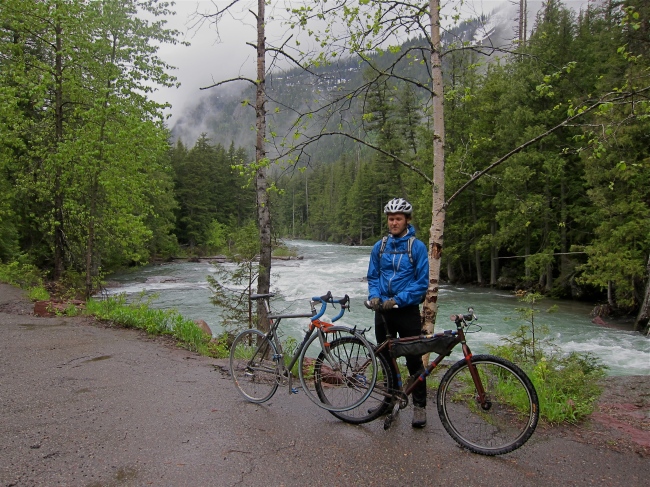 Starting after the end, which may end up being the beginning all over again. On Saturday morning I didn’t want to road walk a bunch, so rode M’s road bike up to the construction site below Packer’s Roost, locked it to a tree, bushwacked around the road crew, and continued on.  Which meant that yesterday evening I had to get it back.  In the rain.  The above setup, with a strap to lock the front brake and four more to tie the bike to the rack, cramped my right pedal stroke but otherwise worked very well. 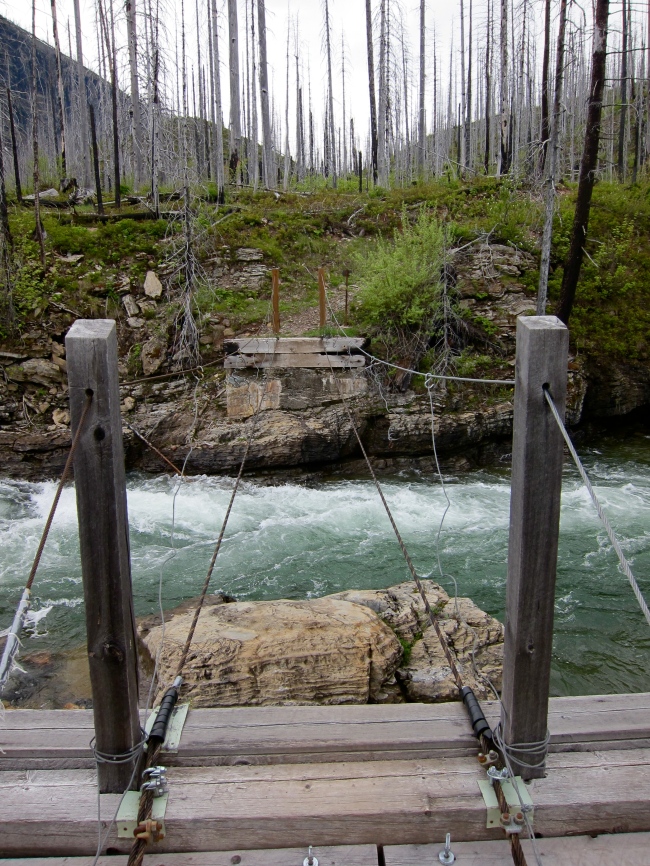 Mineral Creek is cold, fast, and filled with foot-grabbing cobbles.  The planks aren’t in the bridge yet, but the un-acrophobic can still use it.  It doesn’t sway too much. 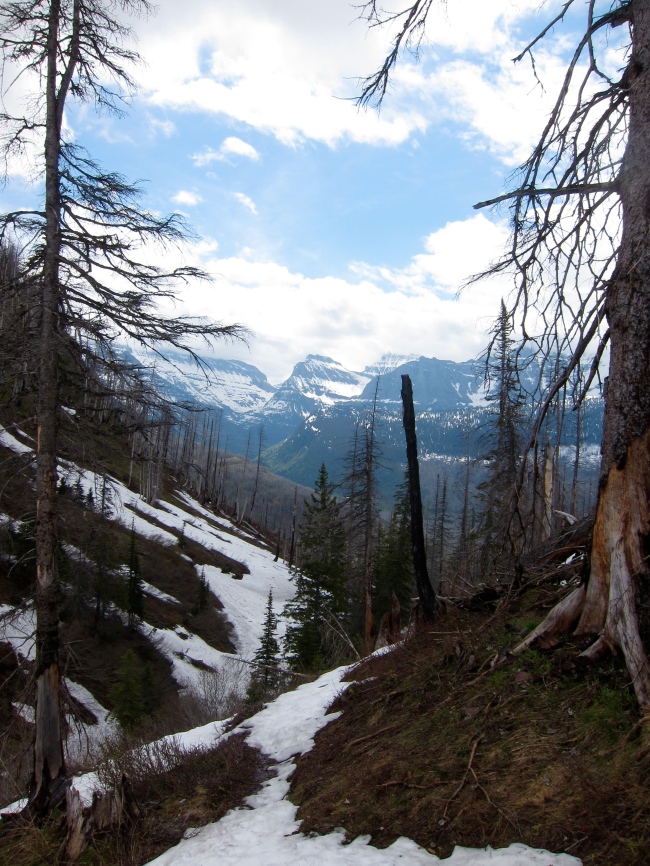 Snow started early going up Flattop Mountain.  You can see the still snowed-in Going-to-the-Sun road in the distance.

Going on these trips is becoming almost disconcertingly routine.  Ordinary.  Flattop was full in with snow, feet upon feet.  I went across it last summer, and thus even though finding traces of the trail was almost impossible I knew it didn’t matter.  Snowshoe generally north and things will work themselves out.  It rained for most of this stretch so no pictures were taken.  Head forward, walk, look around, walk, walk.

I decided to not follow the trail through the Fifty Mountain camp.  The trail north of there skirts steep walls with recent wet avalanche activity.  Plus, when snow covers brush and deadfall one ought to take advantage.  I dropped straight off the north end of the ridge to 5500′ and contoured north to link back up with the trail.  The contouring was easy, the ridge would have been too had I not dropped right into the cliff bands. 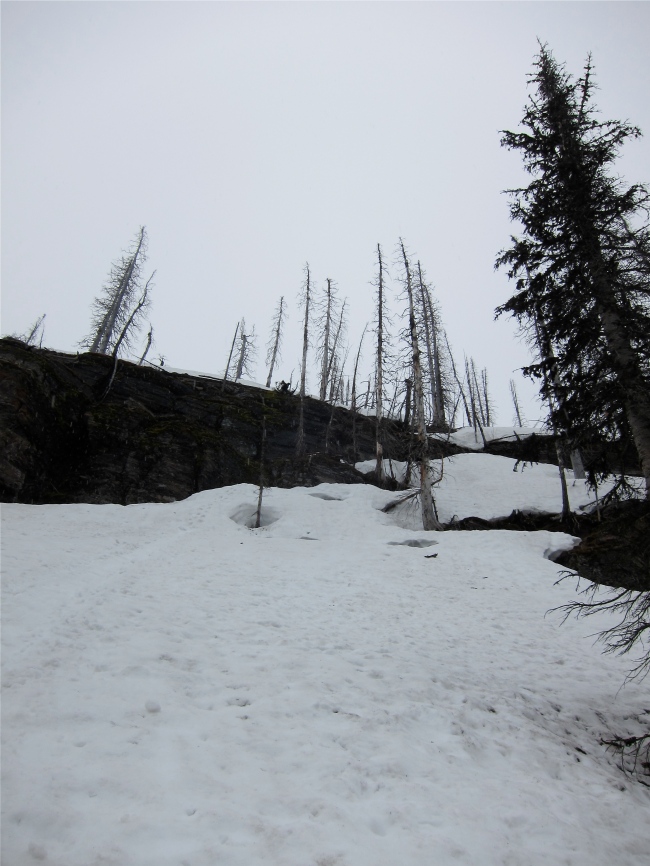 The ice axe got used here.  Once I got down and far enough away I saw that avoiding this would have been easy, but it provided some good entertainment.

Sadly, the crux of the day was about to come, in an as-usual for these trips unexpected location.  The big open slope the summer trail easily crosses was striped with alternating slide paths and alders patches.  I ought to have dropped to the valley floor immediately, but instead stubbornly clung to the level of the trail at the far end and slowly traversed.  I did almost hit the trail right on when it finally emerged from the snow and entered the trees, but that precision had not been worth the effort. 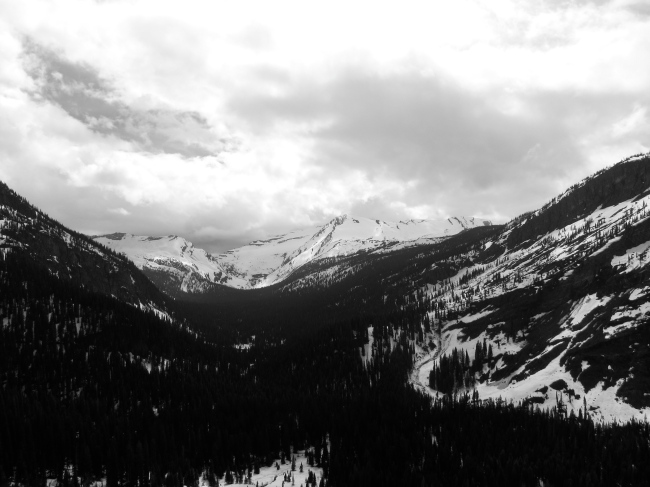 Looking back into the Upper Waterton from the slide path of slothful struggle.

The rest of the day was simple: follow the trail to Waterton Lake and Goat Haunt.

The valley is well-treed and north trending, so there was lots of snow at disturbingly low elevations, then lots of trail in the trees.  Trail in the trees, is for me and at the end of a long draining day, the mind killer.  I find it exceedingly hard to focus on the neat, little things as I ought.  Instead I focus on silly things, like how much my feet hurt.  Waaah! 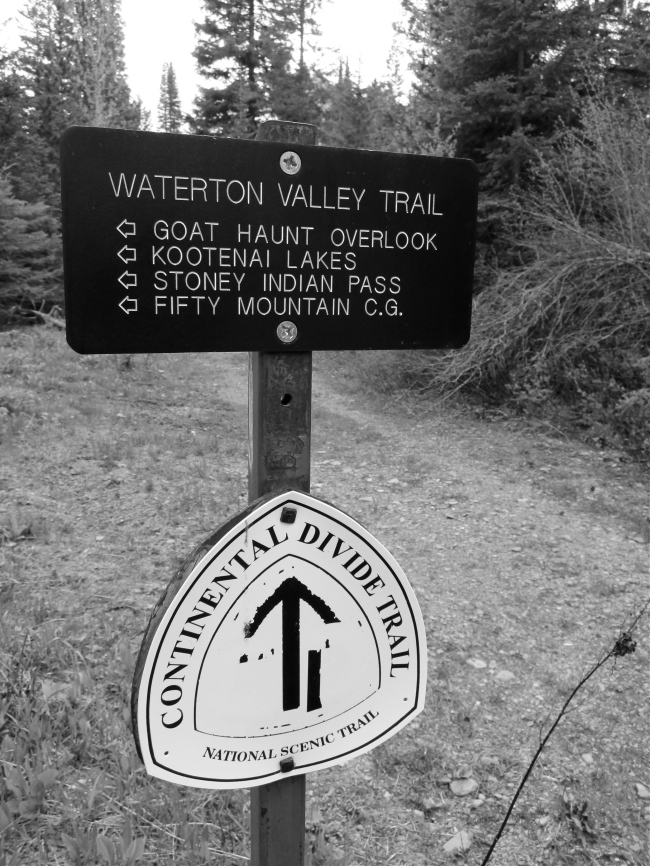 The extraordinary contrast between this trip, walking, and the one last summer (video link above) where I boated most of the river, was the views.  I had few back in the woods, and none of them sweeping or definitive.  One more vote for packrafting there.

A ranger directed me to the very civilized shelter complex at Goat Haunt.  Concrete floored lean-tos, with a dock and big visitor pavilion 30 feet away.  Fiberglass benches, lights, and bathrooms with running water.  Amazing!  I fired up the Clikstand T2 (on test) to make soup and something extraordinary happened.

The stove’s good, but this had much to do with the greater forces abroad in the land.  Sally the backcountry ranger came to visit, as I was the only non-employee at Goat Haunt that evening, and anyone out backpacking with this much snow is a bit out of the ordinary.  In the course of an hour, we learned that not only had we ran into each other last summer (on the above trip), but that she had graduated from Oberlin in the same class as my sister, and had rented the house next door to ours all last winter.  We spent months regarding each others car stickers with interest, but criminally lacked the initiative to say hello!  Thankfully the universe gave another chance, and for me added an extraordinary and unexpected layer to what had already been a superlative trip.

The rain stopped, Sally bid me goodbye, and I built a fire in the fireplace to better contemplate the favors of the world. 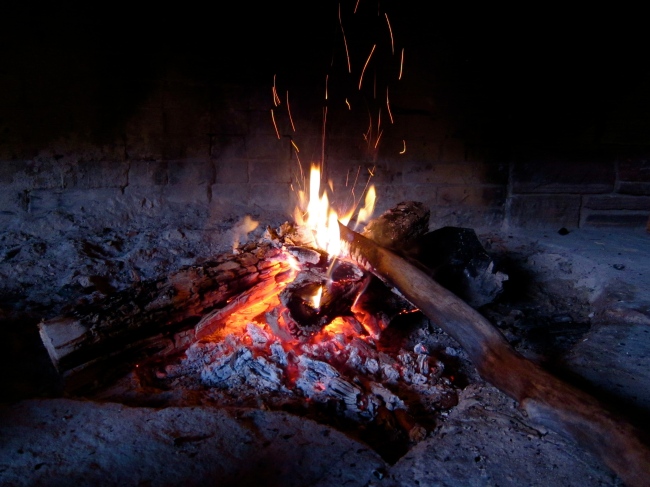 It was a full and rich evening, looking out over the end of the lake.

That’s the pavilion from the lean-to.  Still light enough to read at 2200!  I slept well, but the light and birds woke me up at 450.  I got a bit more sleep, but the morning looked gorgeous and it was time to get moving.

Lots of bear fur for genetic tracking this spring.

The slope up to Brown’s was hard enough in mid-morning that crampons and axe were prudent.

The descent from Brown’s was the only bit of route finding for the day that had me worried.  I recalled cliffs from last summer, but hiking on a dry trail is like being driven somewhere new and sitting in the back seat: you’re not going to notice much of use in getting there again on your own.  Fortunately I had been following two sets of track from a few days before, coming the other direction.  The stretch from Hawksbill had shown me that they knew the trail very well, and that I wanted them on my team.  They, and some big picture common sense, got me through the cliffs and waterfalls with ease.

The rest was, like the day before, walking forward.

Another trip in the bag.

12 responses to “The ordinary, the extraordinary”