I first met Sally in July of 2010, during this trip.  I had crossed over the snow in the Fifty Mountain meadow and was amped to inflate my newish packraft on the Waterton River.  After the patrol cabin the trail takes a brief uphill detour through thick cow parsnip, and I was motoring mindlessly before I realize something was ahead, in the trail.  Bear?  Moose?  Oh dear, it’s a woman peeing.  Too close for true discretion so I just stopped and stared at my feet for a 10 seconds.  She’s Sally, of course, and quite interested to hear about packrafting and chat about trail conditions.  20 minutes later we were both on our separate ways.

Flash forward 11 months, when I met her again, and figured out we’d lived next door all the previous winter.  Flash further forward to last month, when M gave her some bacon jam, we went over for dinner, and Sally recruited me to join in a wolverine research project this winter.

Wolverine bait: one road-killed deer leg bolted to a snag.

The Crown of the Continent ecosystem, meaning Glacier NP and the Bob Marshall, have the only permanent population of Wolverines in the continental United States.  They’re difficult creatures to study, with huge ranges, a love on winter, and a propensity to make light of the most difficult terrain.  Our part in the current project is to gather wolverine DNA across the park, during two months in the heart of winter.

The wolverine’s genus and species name reiterate its infamous appetite, and the methodology preys upon this.  Poles are erected in a variety of backcountry sites around the park, with bait attached to the top.  Wire brushes are bolted to the pole to collect Wolverine hair.  The sites are checked regularly.  DNA analysis allows researchers to know which wolverine was in a given location, and to a lesser degree of exactitude, when. 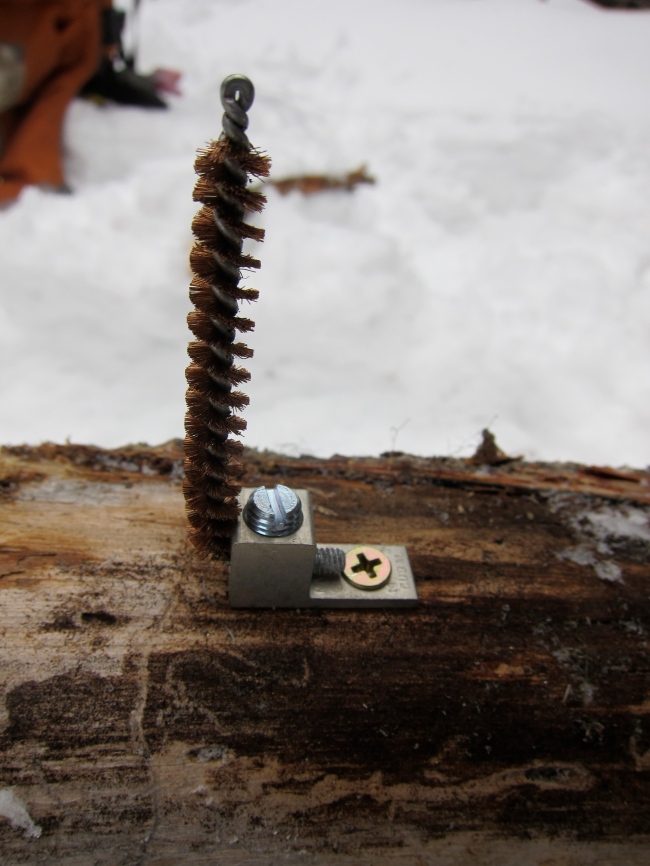 Our job today was to hike in and install one of the bait stations.  Pretty simple, especially given the lack of snow (which made snowshoes or skis useless).  We did have to wade a river, and the creek a few times.  And Sally was carrying a deer leg on her pack.

Bolting a deer leg to a big stick is a dirty job.

The hike in was uneventful, though the first few miles through a recent burn left plenty of fresh deadfall to thread.  Something made easy if you have a deer leg on your back. Selecting the site (in a travel corridor, far enough from trees so pine martens won’t climb it) was easy, rigging the pole and securing it to wolverine-spec a little less so, but soon enough we were done, and headed home. 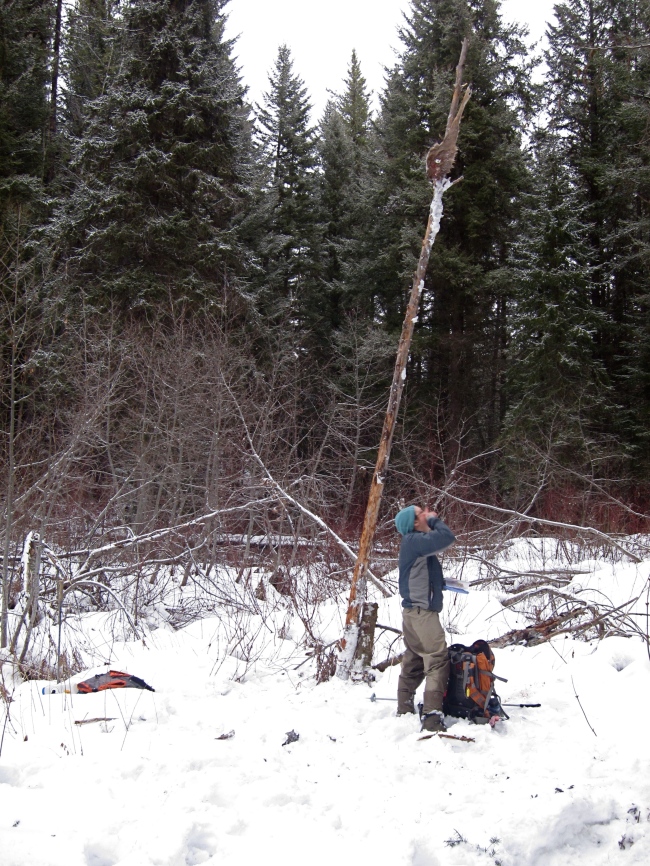 Hopefully a still-awake bear doesn’t knock it over.

As a wanna-be wildlife biologist, this was an especially satisfying way to spend the day.

Counting my Friday-Saturday trip, I hiked (as in, walked, without skis/’shoes) over 55 miles this weekend.  Pretty good for winter.  That other trip will be written up soon, and further junior biologist adventures, much further into the heart of the park, will be coming soon.  I’m very excited about winter now, snow or no snow.