In the last two years I’ve tried a number of ways to carry a rifle while hunting with a sizeable pack, and my copy of the Kifaru Gunbearer has been by far the best. It’s not a very complex piece of gear, but building and using one does have a bit of nuance to it, and took me three versions to get right. I’m not going to tell you how to make one; if you can’t sort that out go over and pay the inventors 30 some-odd bucks for one. 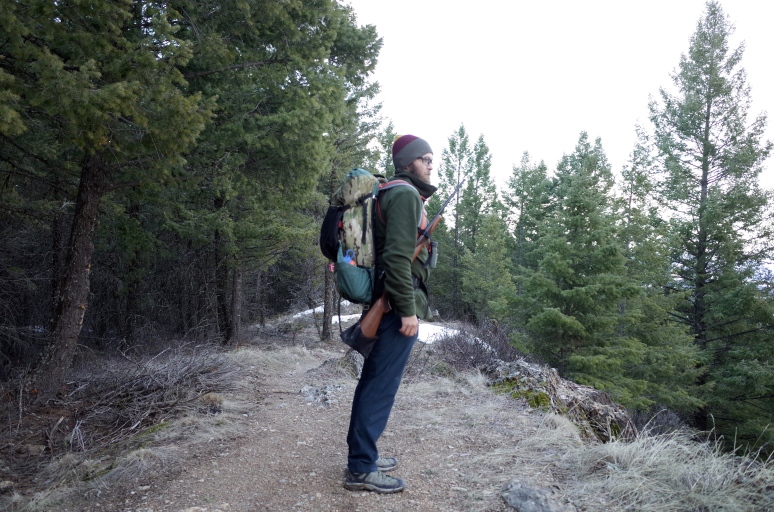 The gunbearer consists of a pocket for the butt attached to the bottom of the pack frame, and a quick-release strap low on the shoulder strap. This second strap wraps around the barrel and stock of the rifle, above the scope but below the forward sling stud. The rifle carries hands-free, and deploys via the left hand forward on the stock and right hand pulling open the upper strap.  Videos illustrate this well.

I like the ability to mount your rifle quickly, and the hands-free carry, but my favorite aspect of the gunbearer is the innocuous, balanced way it stows a potentially awkward and snag-prone piece of equipment.  It looks odd in these photos, but the butt of the rifle always seems to keep out of the way of rocks and logs, and the barrel is right in sight and easy to mind without too much thought.  I’ve been able to climb 4th class rock with a mid-weight pack and a rifle in the gunbearer without (too much) stress. 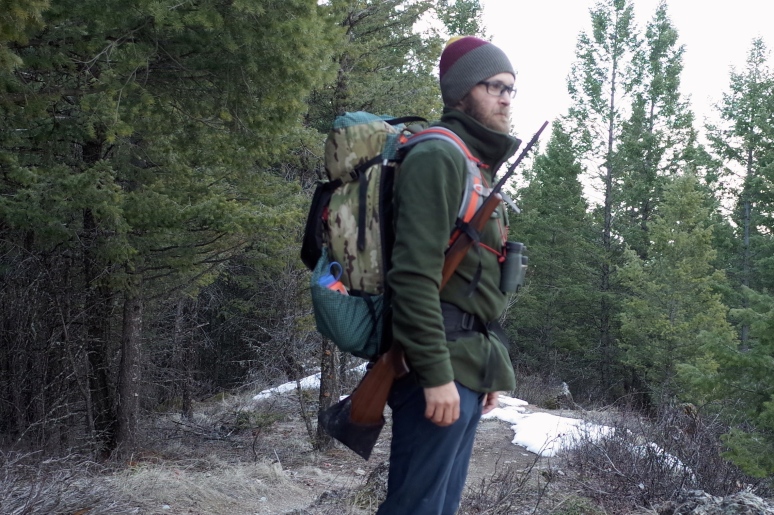 My Ruger 77/22 is shown above, which has a weight (6 pounds, unloaded) and length (38″) very close to my Kimber Montana.  Heavier and longer rifles might require a bit of adjustment, and there’s probably a ceiling on the comfort which can be had from carrying really large rifles.

When I first began working with the gunbearer I ran the rifle too high, which puts the scope into your armpit and screws up the balance.  It’s crucial to have the upper strap tight around the barrel and below the sling stud.  Leaning forward, for example when climbing over deadfall, will tip the rifle out of the butt cup at some point, and having the strap tight will keep your rifle from going for a ride.

Needless to say, the gunbearer requires a pack with a stout frame.  Kifaru recommends attaching the cup to the belt, but I’ve found the weight transfer to be much better when it is strapped to the frame, something made easy by the handy Seek Outside design.

I still bring a sling for transporting the rifle around camp, but 95% of the time it stays in the pack.  It even works well with a shotgun for rougher stretches during an upland hunt.  For wilderness hunters, an almost essential piece of gear.

4 responses to “Best using the Gunbearer”