My rifle, the Kimber Montana

Back on my first real elk hunt in Montana Dick and I got to talking about a lighter rifle for the backcountry.  Many ideas were thrown around, but after some consideration it was decided that a new Kimber Montana in .308 would be the best, most versatile option.  Shortly after he headed back to Ohio Dick took matters into his own hands and before the end of that hunting season I had a new rifle in hand, one which shaved almost 2 pounds off my Remington 700 in .30-06.

My Montana has a Leupold 4×33 scope, and Dick cut 2 inches off the factory barrel, bringing it down to a practical 20.  After hunting out the last part of the 2013 season I proceeded to monkey with it a bit over the coming year; installing a larger and incrementally lighter titanium bolt knob, a lighter (and black) aluminum trigger guard, flush cups on the left side of the stock, and giving it a Duracoat paint job (Desert Warrior Dark Earth).  I also used JB Weld to build up a bit of a palm swell on the sides of the pistol grip.  The first set of mods dropped weight, while the later half added it back.  As pictured, my rifle is just a hair under 6 pounds empty.

Flush cups allow for a slung carry over your back which does not have the trigger guard poking you.  Installing these on a Montana bears some explication.  The Montana stock is a very hard kevlar/carbon shell filled with fairly unsubstantial foam.  Even with a brand new Forstner bit it takes a lot of effort to get through the former, even though it’s less than 2mm thick.  To give the cups a bit more to bite into, I back filled the inside edges of the holes with epoxy, and added a bit to the exterior as well.  Once this cured I tapped it, coated the flush cup threads with more epoxy, then screwed them in and let the whole thing set.  Thus far they’ve proven both handy and durable.

The Duracoat has proven quite satisfactory, though after a lot of use it’s showing plenty of wear.  I used a shake and spray kit, which is effective so long as you keep the whole thing well warmed (tough in the dead of winter).  I like the color very much; they ought to rename it Mule Deer. 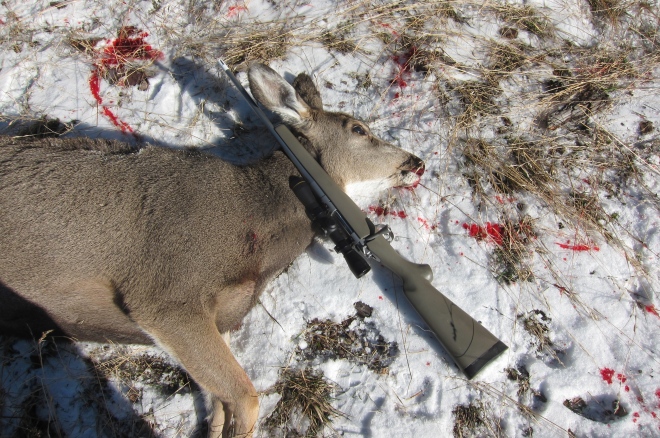 The light weight of the Kimber has proven to be a massive asset, but the improved balance and ergonomics have let me take to it in a way I never did with the Remington.  In fact, over the winter I purchased a Bell and Carlson mountain rifle stock for the 700 which almost copies the dimensions of the Kimber stock, and while I haven’t really wrung the new .30-06 out yet, I think this version will get a lot more use.

I did have a few feeding issues early on, which is a problem with a blind magazine.  These were solved definitively by two things, making certain all the roads are fully to the back of the magazine (there isn’t much extra, and if they’re a bit forward the nose tends to catch), and polishing the feed ramps of the follower and edges of the magazine box with 1500 grit sandpaper.  Since I did this I’ve been able to run through magazine as fast as I can work the bolt, with no issues at all.  The larger, “tactical” ti knob helps with this. 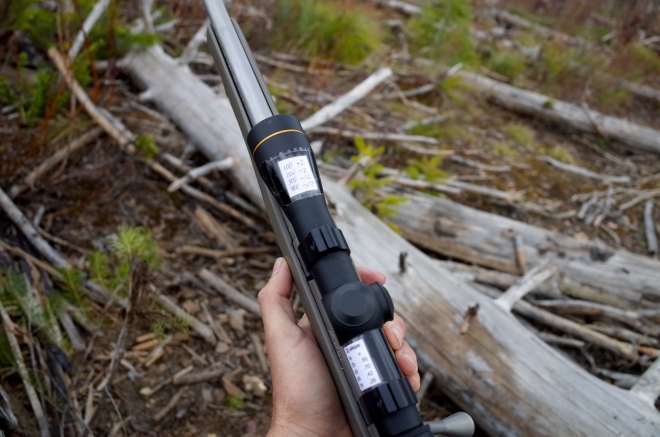 Big variables are in fashion, but I find the small Leupold exceptionally effective and easy to use.  The eye relief is considerable, and the eyebox exceedingly forgiving.  Unlike the 3-9×40 on the 700, the 4x always gives me a perfect sight picture immediately upon shouldering.  At my current skill level, the magnification and reticle do not hold me back.

The .308 cartridge has been effective on a variety of deer-sized and smaller game from 50 to 300 yards.  Not having yet used it on either bear or elk, I haven’t given it much of a test.

While backpacking I always carry my rifle in a gunbearer, but I occasionally use a sling day hunting, and always bring one on backpacking trips for easy carry around camp.  You just never know when you’ll see something, after all.  My sling is a length of extra thick 1″ polyester webbing, with a single triglide for adjustment, mounted on Blue Force gear swivels, which are expensive but a lot trimmer and generally more quality feeling than similar offerings from Magpul and others.  Field accessories are rounded out by a neoprene scope cover, ammo, and electrical tape over the muzzle to keep out obstructions, as well as extra tape around the barrel, and the drop chart and angle compensation ratios taped to the scope.

To quote Evan Hill, “…the best parts of material culture are the ones that are both utilitarian and expressive.”  Aside from good shoes, there is nothing more utilitarian than something which allows you to feed yourself and those whose continued existence you prize.  This goes a long way towards explaining why, in a short period of time, I’ve become so attached to this rifle, moreso than bikes and skis I’ve had for far longer.  It’d be one of the first things, along with my packrafts, I’d grab if the house was on fire.  A rifle is similar to a mountain bike or ski rig in that optimal function isn’t as simple as trouble-free operation, but is found in a close bond between tool and user.  Given my brief history in shooting, I’m very happy at home at home I’ve become with this rifle.  I don’t think it’s a coincidence, but rather the result of good design.

After all, there’s a reason Kimber did not name it the Colorado.

10 responses to “My rifle, the Kimber Montana”