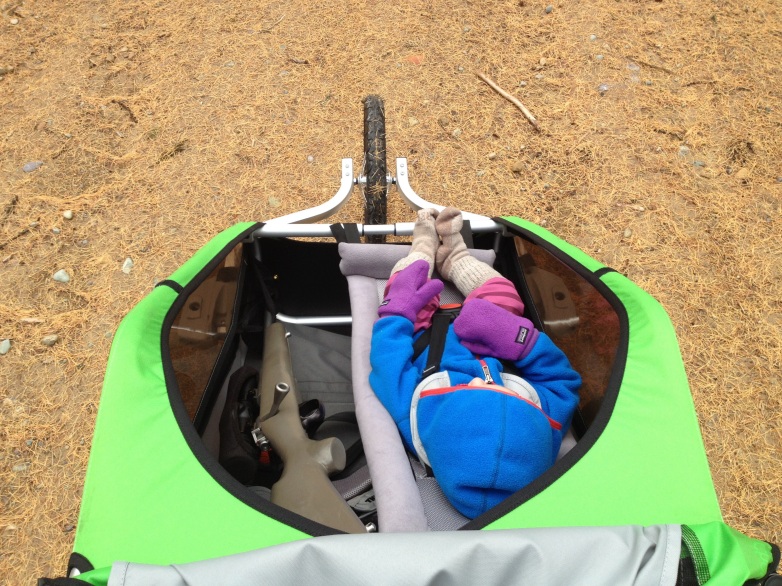 I’d been running this outlandish idea through my head since before LB was born, and practicing for months. How to hunt deer with an infant in tow?

Two options were obvious, each with advantages and disadvantages. Carrying the baby in a sling, with a pack and rifle, was possible, but taking a shot would require seeing an animal, putting the pack down, putting a pad or jacket on the ground, putting LB on the pad, sneaking a safe distance away (far enough to not harm his hearing, close enough to keep the coyotes from stealing him) and take a shot. The advantage here is being able to go anywhere which didn’t involve excessive steepness, and back at the end of September I did what would have been a successful dry run on a 3×3 mule deer had it been rifle season and had I not already punched my general deer tag. The second option is pictured above, pushing LB in the chariot in stroller mode along dirt roads. By the time we got home from Utah the only deer tag I had left was the whitetail doe tag for the local valley, which made this second approach the way to go. We have a lot of whitetail deer in the Flathead, and in the few patches of public land they are both abundant and pressured hard. I put a lot of days into hunting this tag last fall, ultimately without success (I bailed to a backup area with easier hunting). The chariot is easy to push on even rough logging roads and horse tracks, and has a bomber brake which is quick to set with one foot.

Despite all that LB and I almost used option one with good success last week, hunting for a few hours late afternoon on the heals of a snow and rain storm. The air was heavy and damp, and with the deer having been bedded for most of the day they were both out moving and less able to hear and see.  On two occasions I was able to deposit LB carefully down in a mud-free spot, move off, and be within a few seconds of a good shot window.  I drove home in the dark thinking that the goofy plan might actually work.

The next day we were back, this time with the chariot.  5 minutes from the car a small doe crossed the road a hundred yards away in full flight.  The sun was out, the air was crisp, and we were both enjoying a nice afternoon walking logging roads.  LB napped a few times, but for the most part was wide-eyed, awake and silent bundled in layers of fleece and with my jacket tucked around him.  A little over an hour from the car, a deer appeared ahead, actually on the road, with us mostly hidden by a subtle dip and curve.  With the deer unaware of us it was a perfect opportunity.  I locked the chariot and crawled forward.  The pressure was on, with an opportunity better than any I had hoped for right in front of me.

So naturally I missed.  Twice.  From prone, at a deer facing me perhaps a hundred yards away.  I watched the doe bound up the hill, visually unscathed, and turned around to check on LB only to see a group on horseback a hundred yards back on the road.  I moved the stroller over to the side, sat in the dirt, and looked my placid son in the eyes as the horses passed and the realization that I had wasted a golden opportunity washed over me.  We went over and searched for blood, but I knew there would not be any.  The tracks left as the deer spun and jumped across the road and into the woods were plain in soft dirt.  Equally plain was the improbability of having a comparable opportunity again this year.

There was plenty of daylight left, so LB and I walked back a ways and walked out another road.  3 more deer disappeared back into the thick woods, leaving no chance for a shot.  The previous weekend I had come out early by myself, walking to this same spot in the full dark of morning, before blowing my setup right at first light when I decided I needed to move a bit to the left and spooked a deer right across the road.  It was still early in November, after all, and I had weeks left to fill this tag, be it by myself or with LB along.

The air got colder and I put on the vest LB which had been LB’s blanket, replacing it with a warmer jacket.  As we headed for home we crossed paths and exchanged a few words with an older gent on an ATV, who seemed amused that someone would be out hunting with an infant. 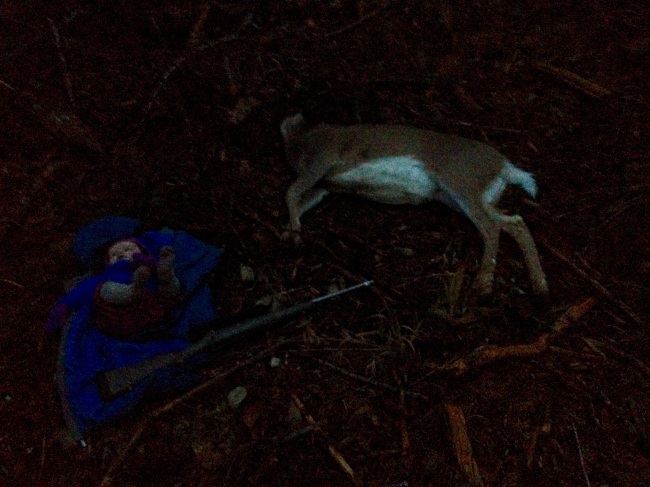 As the poor picture shows, I did get a second chance.  Quite close to the car and quite close to dark, walking through an open area recently logged, the ground heavily obscured with small bushes and piles of slash, I saw a deer.  To be exact, I saw a part of a deer, a horizontal patch of grey/brown which a recently trained part of my brain saw as not just a stick.  Last fall I probably didn’t see 10 deer in similar situations.  This time the deer knew something was up there, but wasn’t overly concerned, and I gave myself plenty of time to move 40 feet forward of the sleeping Little Bear and get a good rest of my pack.  My rifle went off, and the deer twitched to the right and disappeared from view.

Now the genius of my hunting with baby plans got complicated.  The shot had felt dead on, and I was pretty sure I’d find a dead deer within a short distance of the spot by the tall aspens, but I couldn’t get the stroller far off the road through all the garbage on the ground, and didn’t want the burden of carrying a baby while worrying about administering a follow up shot.

LB had not woken up due to the shot, and I could get the chariot well off the road and him within easy sight, so I locked the stroller and left the sleeping baby behind as I made my way 80 yards back into the woods.  The deer was laying right were I shot it, spined.  I quickly put another bullet through the head, reflecting that no shot should be taken for granted, and that the deer must have been on the verge of running off.  Now I could go retrieve LB and figure out the easiest way to get the deer and us back home as simply as possible.

The hunter on the ATV saw the stroller, empty, and stopped to check on us.  Seeing my headlamp off in the distance he made his way through the tripwire forest, and found me changing a diaper.  Bemused and happy, he asked if he could hold and comfort the fussing (doubtlessly hungry) baby while I finished gutting the deer, then generously helped me drag the deer back to the road, put it on his rig, and motored it the last half mile back to my car.  All the interactions I’ve had with hunters in the field this fall have been excellent, and this one, for obvious reasons, was especially precious and welcome.

Little Bear won’t remember this, regardless of when or if he becomes a hunter, but he’ll benefit from the early childhood hours out developing his senses in the woods, and every day I’ll benefit from one more adventure more multifaceted than anything I could conceive 12 months ago.