This trip was a big deal.  A proof of concept for the near future, and the first backcountry outing with Little Bear on a route that wasn’t a compromise; our loop down the Honaker trail, down the San Juan River, and up Slickhorn Canyon all the way to the northernmost TH was one we’d have eyed pre-baby.

Ideal routes are hard to come by, which is why when sickness forced us to delay the trip and cut it by a few days there was never any real question of changing objective.  The loop was long enough to be substantive, short enough to accommodate the slowest likely pace, easy floating with a minimum of probable portages, and potentially rugged hiking with good scenery and a decent amount of water.  And most importantly, probable warm and dry weather, which is good for diaper changes and adults who haven’t seen 70 and sunny since October.

So we left town Friday afternoon, made it to Missoula with one feeding and diaper stop, left Missoula at 10, made it to Salt Lake City for breakfast, Moab for a late lunch, Delicate Arch for late afternoon light, and a hotel in Blanding after dark.  Next morning the only thing left was to drive an hour to the ending trailhead, drop the bike, and then drive another hour to the starting trailhead.  And we had to pack. 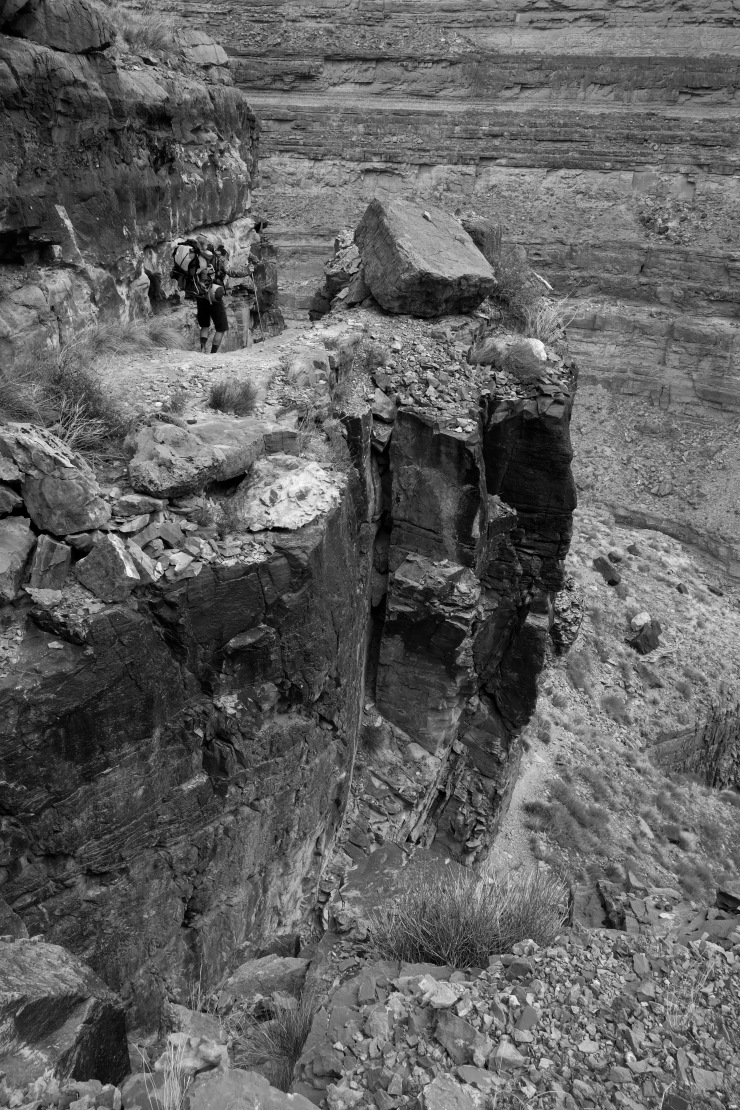 It took two hours the next morning to get all our gear into two packs.  Boat, paddle, 3 PFDs, drybags, camp gear, 72 size 3 disposable diapers, and a fairly small but very heavy bag of food.  M wears her pack belt very low, and it seemed like a very good idea to keep her carrying her well-tested, but not very large, pack.  So after leaving a bike locked under a tree I repacked everything at the side of the road, and we headed down the Honaker heavy; M with her pack and plenty strapped on, me with the ridiculous rig of bags and water strapped between the Revolution and the Poco, with two PFDs attached to the rear.

Fortunately the Honaker is a brilliant, well routed and built trail.  It drops over 1000 vertical feet in a very short-line distance, snaking long switchbacks between cliff layers, and getting down those cliffs with big steps, clever routing through cracks, and plenty of artful rock stacking.  It surely wasn’t on their list, but miners gave the current generation of Utah hikers and bikers quite a lot with their roads and trails, so often in unlikely places and leading to improbable places.

It was hot when we made it to the river, after 2.5 steep and strenuous miles.  Our hike out Slickhorn would have more then double the vertical ascent, and I was thankful the balance of our route would tilt towards climbing, and that for the next day or two our only concern was the logistics of getting use and all our stuff into the boat.  Which, sadly, we didn’t bother to photograph.  A few miles of floating that night got us to a small beach, where we pitched our new tent and gladly, tiredly, made dinner.  On the big, mid-height bench across the river four desert bighorn ewes fed into sight from the left, and were soon joined by two more from the right.  Everyone was asleep before dark.

We’ve both grown used to waking multiple times in the night, for diapers and feedings, but that first night had a bit of edge.  Not only were we out in the wild, and to a certain extent irreversibly so, but M’s damned Big Agnes mat was going flat, and when I looked outside to investigate the increased water-noise, saw a river which had crept 20 feet closer to our tent.  The guypoint on the far right in the above photo was almost underwater.  With a tired mind, and the absolutely safe bench above covered in prickly plants, I told M that a further two feet of rise was unlikely, and went back to sleep.  Thankfully the 300 cfs surge which put the river up over the sandbars neither got worse nor went down, and we benefited from a faster current, and not having to panic-move our camp in the night.

The San Juan was beautiful, the narrow upper section especially.  Both the river bottom and the gorge were skinnier than expected.  Campsites were few, sheep sightings were occasional (including a group of mature rams right on the bank), and we even saw two beaver out harvesting willows, and a Rio Grande turkey stalking through the tamarisk.  We portaged Twin Canyon rapid, and I ran the boat down through Ross rapid while M carried LB around.  The many smaller riffles were good fun, a breeze kept temps reasonable, and M fed LB asleep while we kept floating.  Mid-afternoon a big roar sounded out of sight, and an obvious scouting trail river left had us undeniably at Government rapid, and therefore less than an hour from Slickhorn Canyon.  We knew LB loved hiking, but our boating practice had been modest, and his acceptance of his PFD mixed at best.  But there we were, on the leading edge of the schedule I thought possible, with two adults and one infant both happy and rested. 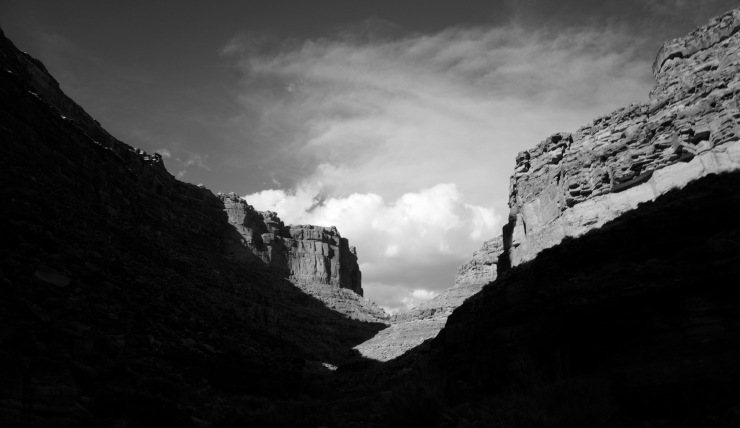 Lower Slickhorn did not mess around.  Flowing water.  Polished stone benches.  Thick vegetation.  Steep, thin sheep trails weaving up cliffs and through boulders to get around dryfalls.  My very heavy, very very large pack, whose effect on my balance and precious cargo gave me a cautious approach to the unending difficulties.  My legs and core, who were working and working hard, but also working well.  And finally a small patch of sand not far from dark, suspended between a pool and a rock ledge above a climbing field of house-sized boulders, chirping frogs hidden everywhere.  M got a soft buffer for her malfunctioning pad, LB got a soft surface for his inevitable in-tent faceplants, and I got a flat seat with a view while I cooked dinner.

At that point it seemed plain that not only were we going to do the trip, but that we were going to do it well, and happily.