Earlier this week we (M, Little Bear, and I) had the chance to head down to SLC and visit the Outdoor Retailer show as guests of Seek Outside.  It was a good time, and something I’ve wanted to see for quite a while.  As an introvert who is determined to embrace his aversion to strangers I expected to hate the whole experience on a broad level, but really had nothing but fun.  Outdoor stuff is something I’ve cared about and studied my whole life, and in that respect OR was like going from high school to undergrad and suddenly being immersed in interesting classes for the first time ever.  The following are highlights from 5 or so hours of wandering the floor with Luke Fowler from Seek Outside. 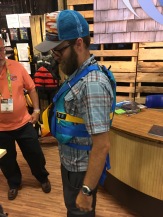 MTI’s new Vibe PFD is the item I’m most excited to get in the field.  It’s a pullover with a modest array of features and a very soft, pliant foam which is very well tailored.  Most PFDs use panels of much stiffer foam, which packs poorly, is a worse pillow, and in a packraft often interferes with either the spraydeck, your chin, or both.  It stuck to my torso better than anything I’ve ever tried, yet has 15 1/2 pounds of flotation.  The front pocket has a zippered mesh pocket with a pass-through handwarmer behind.  The yellow band pictured above is quick-release leash tether for a SUP, and points towards how a similar PFD could be built into a truly lightweight rescue vest for backcountry whitewater. 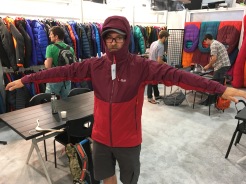 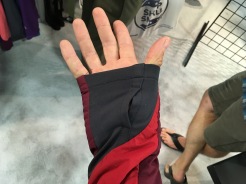 Rab is expanding their use of Polartec Alpha, and for the me the most interesting option is the revamped Strata.  It features 120 grams/meter of the new Alpha, which doesn’t require a liner and resembled a very loose fleece.  The new Strata is still shelled by uncalendered Pertex Microlight, which is a bit more wind resistant and quite a bit tougher than the shell on the Patagonia Nano Air, and features stretch gussets in the cuffs with a nicely integrated thumb loop.  I’ve found the original Strata great for winter and spring, especially ski touring, and a warmer version with improved features will be even better.

The Aire Bakraft packraft/IK hydrid looses the goofy seat/inflation bag/drybag/potato in favor of a normal backrest, and lash points both fore and aft.  It remains behind the curve insofar as easily attaching lots of overnight gear goes, but the thigh straps and self-bailing floor have established themselves as very solid.  Aire will also have an XL version of the Bakraft (right), which will cost around $2000. 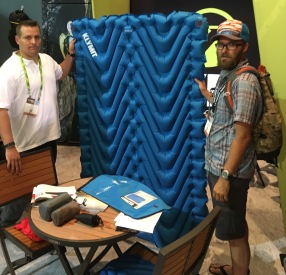 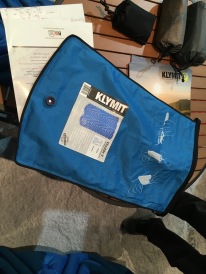 Klymit’s Static V Duo is 47 inches wide, a pragmatic option for couples, and families with a small kid.  Most interestingly, the valves have been revamped to allow the stuffsack to act as an inflation bag, a welcome feature.

Adidas’ Terrex Agravic has the kind of upper reinforcements and tread pattern that might sway me away from LaSportiva.  It seemed to have a nice blend of low drop and enough, but not too much, stiffness. 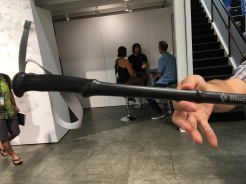 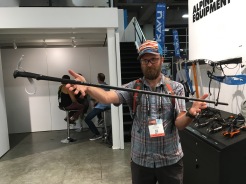 Black Diamond’s Carbon Helio ski pole is molded all in one go; only the tip and strap are separate pieces.  It is very light, and exceptionally stiff, perhaps moreso than any other pole I’ve hefted.  One of those rare pieces of gear with serious and immediate wow factor, which it should given the 300 dollar price tag. 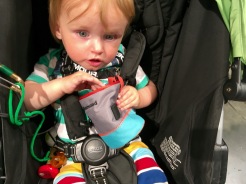 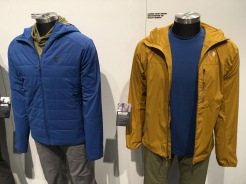 Little Bear approves of the new BD kids harness, helmet, and chalk bag.  The First Light hoody (in blue) is BD’s entry into the “active insulation” market, with a very light and airy nylon softshell face fabric which is similar but not the same as the Alpine Start windshirt.  The Alpine Start appears unchanged, save for new colors. 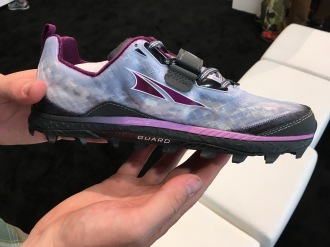 Altra’s FKT shoes, available for both men and women, promises to shake their reputation of combining a great fit and midsole with weak uppers and poor rubber.  The tread is aggressive, the rubber seems softer than their past stuff, and the upper has myriad TPU reinforcements.  At 17mm (or is it 19mm) tall the FKT is comparable to the older Superior. 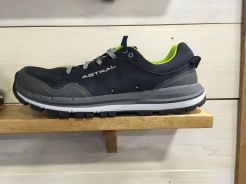 Astral is expanding their footwear line to have a few more hiking-specific models, which look to have good tread patterns and decent uppers.  Astral has gotten mixed reviews when it comes to build quality, so I’m taking a wait and see approach with their new models.

The flagship of Sierra Designs new Skurka Series (no pressure) is the Flex Capacitor pack, which compresses neatly from a generous 60 to 40 liters using a top to bottom gusset and four compression straps.  Neatly done, but a lot of material and clutter needed to achieve it.  The real noteworthy thing is the overall effect of the wishbone frame (made from alu tent tubing), aggressive lumbar bad, and torso pads.  It certainly seems like SD has managed to build a traditional lumbar pad design with a belt-frame connection robust enough for 50+ pound loads, in a sub 3 pound package, and good torso mobility.  At around $200 pricing will be very attractive.  If you don’t want to spend $350 on a Seek Outside Divide, or strongly prefer to lumbar pad with emphatic pressure, this will be a good option. 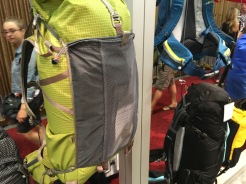 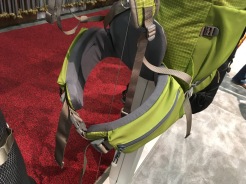 The Exped Lightning, about to get dethroned as best budget lightweight load hauler by the Flex Capacitor, gets a new hipbelt and optional mesh accessory pocket.  The rest of the pack appears unchanged.

Osprey had an all-mesh demo pack, with was neat, and the new Aether AG series gets some nicely sized hipbelt pockets with a stiffener sewn into the interior binding (bright orange), which makes one-handed opening and closing easy. 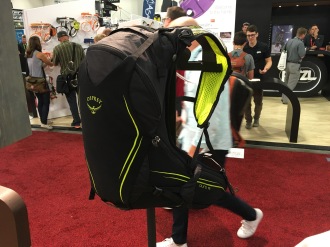 Osprey also has a new entry into the ultrarunning vest category, with more refined pocketing and compression than the smaller Rev packs. 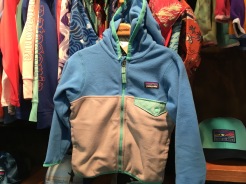 For me the most interesting thing at Patagonia was the continued, robust infant and kid clothing.  The new Micro D hoody, and new colors of Baggies Summit pants, represent two very useful items Little Bear has lived in this spring and summer.  The pants in particular are high quality; double knees for crawling, and a quick drying yet bug proof fabric.  I want an adult-sized technical-fit hoody in the Micro D fabric for myself.

BD’s Blitz packs are clean alpine climbing packs, with a closure that recalls the Patagonia Ascentionist series, but reversed.  The small pocket seems like it should be more useful when the pack is totally full.

Arcteryx does DriDucks (kidding), aka permanent beading technology.  If this DWR-less way to do WPB raingear proves durable and functional it will be a major game changer. 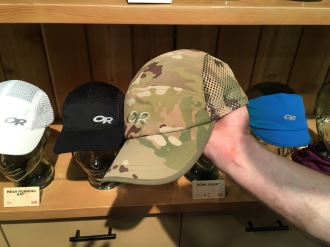 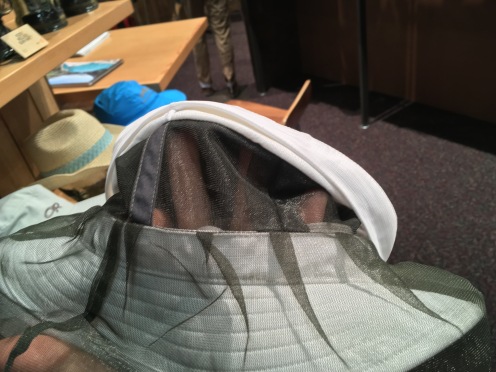 Outdoor Research had a truly massive range of hats, which were displayed front and center in their booth.  I wonder how much of their business is accessories?  Standouts are the excellent, vented bug hats, and the many multicam hats and visors which are now 100% nylon, rather than the cotton blends of past generations.

This is the Kokopelli Hornet Lite, their deckless boat with 70D tube fabric and 210D floor (the same stuff used in the tubes of their mainline boats).  The Hornet is adult sized, and while I’m sure it could be rolled much smaller than the above the weight and bulk premium all their models have over Alpackas gives me pause.  They do have factory thigh strap lash points which are well positioned, and are working on extension tubes which will allow their boats to be tempered on the go.  Overall it seems good for Alpacka to have real competition, but Kokopelli doesn’t seem as mature with their designs.

In non-photographed news several other companies seem be keeping with the low-drop trend, though many of them are fitness or crossfit rather than trail running companies.  Hopefully the maximalist trend runs out sooner rather than later and sanity returns to the off-pavement shoe world.

Cilogear had a 20 liter worksack made from a cuben/TPU laminate, which the owner preferred I not photograph.  Oddly, the coating side was out, which seems a recipe for delamination.

Otherwise, there were many, many companies making inroads of one sort or another into the hipster/glamping/softcore outdoor market.  Impractically featured, very expensive 25 liter daypacks were a popular item, often in vaguely ethnocentric or colonialist prints.  Though car camping remains an oxymoron, I do like that the outdoor world remains a big tent which embraces and equips many levels of engagement with the wild.  I just hope all these companies make function, in addition to aesthetically appealing, products.  Nothing puts people off camping like a cold sleeping bag and leaky tent.  The new dome tent Sierra Designs had in their booth, touted as the highest quality tent available for 200 dollars, is the sort of thing I’d like to see more of.

Overall, I’m looking forward to going back in the future, to be able to spend more time, and be more systematic.

17 responses to “Tidbits from Outdoor Retailer”