Montana brewery laws take some getting used to.  The Kafka-ishiousness does not approach Utah levels, and the peculiarity has quite inadvertently given birth to an institution which adds a lot to a quiet, family-centric, even staid city like Helena.  Before recent beer and pretzel adventures are further discussed, some juridical background is in order.

In Montana a nano-brewery, as defined by law, produces less than 100 barrels a year.  A nano-brewery license allows a brewery to give away unlimited free samples between 8am and 2am, sell beer for customers to take home during the same period, and distribute beer to retailers, wholesalers, and the public using only their own equipment and employees.  There aren’t many nano breweries in Montana; you only get 12,400 proper pints out of 100 barrels, which doesn’t cover much overhead.

A domestic brewery license allows up to 60,000 barrels a year, and has the same restrictions as a nano brewery, with a significant exception that 48 ounces per person per day may be sold at the brewery, between 10am and 8pm.  This is important.  Montana caps the number of liquor (bar) licenses in a given municipality, caps which have generally not been adjusted since the 70s.  Bar owners, and their lobbyists, have been through several scuffles with brewery owners, and their lobbyists.  Bar owners see the worth of their business being diluted.  Brewery owners similarly see a threat to their new, and often thriving, businesses.  As of 2018 the argument seems to be in stalemate, waiting for the next (biannual, and only 90 day) legislative session.

Most breweries are as the Times says neighborhood pubs in function, if not quite in name, and the hours and quantity restrictions have made the brewery scene a well-behaved, even demure affair.  Most folks can get buzzed on three pints, especially when they’re an IPA or Porter well above 7%, but outright or at least strident drunkenness is almost unheard of.  As a rule Montana breweries welcome children, with many having games to occupy the young and old, and are generally a good place to have a fairly quiet conversation with your guests.  When you visit, expect the server to ask and write your name on a small card, which you’ll be asked to retain to track your consumption, paying when you leave.  They occupy a different, and for many superior, niche than bars.

Our first stop on a recent afternoon tour of all five local breweries was Helena’s newest, Crooked Furrow.  Industrial chique is the rule in breweries, with all five pubs prominent in galvanized steel inside and out.  Crooked is the most outstanding in this regard, and with a concrete floor and lots of metal is only the furniture and a nice coat of paint departed from a premium livestock facility.  The back yard is fenced, with fresh sod, and the family-friendly vibe is further burnished by abundant toys and changing tables in both and women’s and men’s bathrooms.  Crooked isn’t filling growlers yet, a wise precaution given their popularity.  On a recent Friday evening we gave them a pass entirely, as their small parking lot and the whole surrounding block was entirely packed.  On our tour we visited them first, in hopes that early afternoon would mitigate the lack of space, but their ~900 square feet was all but standing room only.  As another rule Montana breweries are family affairs, the fruition of personal ambition long-held, not financed by speculators.  Crooked is emblematic of a problem this creates; the almost immediate popularity that befits good beer fills spaces and pads margins, but makes for a lower growth ceiling than necessary, as well as a (potential) loss of customers who enjoy being able to hear themselves think.

Regardless, Crooked has excellent beer.  The Bitter is satisfying crisp and bracing, and authentically 4% and 40 IBUs.  The Coffee Oatmeal Stout was warm and substantive, drinking one was filling, but not overly formidable, and I certainly could have had a few more, had the mission not demanded better pacing.  The New England Pale Ale (pictured well above) was light and easy without lacking in novelty.  Crooked is worth the trip, though for the part of Helena who lives like we do up on the hill, it is a trip, with the brewery hidden in plain site next to a junk lot behind Sportsman’s Warehouse.  It won’t be often, but I will be back.  Bonus; they serve everything in both 8 oz and 16 oz pours, with the former being just enough for a comprehensive taste.

Next on our list was Helena’s second newest brewery, Snow Hop.  Located in the heart of suburbia, unlike Crooked Snow Hop is within plausible and pleasant walking distance for a good number of folks.  The interior is bright, but a hair smaller than Crooked, and lacking in outdoor seating.  Universally the beers were close, but a ring or two wide of the mark.  The Vanilla Stout was more syrupy than I prefer, the Stellar IPA good without being especially lively or fresh, and the Kolsch workmanlike in its lightness.  The Medusa was more outstanding, a hoppy rye pale ale infused with a peppy juniper finish.  A bit heavy and a tad cloying, it was an interesting yet one-and-done sort of beer.  The Grodziskie is also worth elaboration.  A light ale brewed with smoked malt, the taste itself was not noteworthy, save the distinct and for me unique nasal finish, as if the just removed glass had been replaced under your nose by a freshly boiled kielbasa.  I like kielbasa, but try as I might I could not find this particular sensation very pleasant.  Perhaps the high carbonation traditional to the brew, and distinctly lacking in the Snow Hop version, buffers the sensory transition.

Next on our list was Lewis and Clark, the only large brewery in Helena and the only one here discussed not subject to the aforementioned rules (because it has a liquor license).  The magnitude of our mission was starting to become apparent, and I would have advised skipping this one had it not been for the snack bar.  Lewis and Clark is located in an old paint factory, with two big floors and a commodious patio.  It is a good, and generally uncrowded, place for a toddler to roam.  The snack bar has good beer brats and pizza, the crust made from a snappy mix of spent brewing grain.  Unfortunately I rarely find a beer there I like.  The lighter usuals, such as Yellowstone Golden Ale and Miner’s Gold Hefeweizen, are straightforward past the point of being soporific, and the darker standards, such as the Backcountry Scottish Ale and Big Belt Weizenbock, are turgid and thick and coat the pallet in an enduring way reminiscent of 7th grade school assemblies.

On our visit we were treated to a satisfying brat, and a satisfying loud cover bad alternating ZZ Top and Metallica.  We took refuge at the long table in the art gallery, and contemplated how the entertainment was only a Jason Aldean short of the truck-nuts triumvirate at the heart of 21st century western redneck culture.  I also took refuge in their Celebrate Montana Porter, brewed from a late 19th century recipe produced by Helena’s long-defunct Kessler Brewery.  Described as a combination of a traditional porter and a brown ale, at 5.6% and 28 IBUs it was drinkable without being heavy, interesting without being dense, the Malcolm Gladwell of dark ales.  I was revived by the quality dark beer, and M and LB were revived by a brat, but the oppression of loud music and pretentious art conversation was too much, and we made Lewis and Clark our quickest stop of the afternoon.

Global and existential fatigue, and intoxication, were setting in at this point, so we rallied to the psychological shelter of our local, Blackfoot.  Choosing a favored brewery is not entirely unlike selecting a life partner or long term residence; it would be foolish to dismiss surface trivialities, but over the years the evolution of intimate discovery is quite as significant as how much at first glance you like the look and the taste.  Blackfoot is second closest to our house, separated by a pleasant 1 mile walk which crosses no busy streets, is possessed of a second story deck with a great view back towards our abode and the trails and trees which are immediately above it, and makes some consistently excellent beer that often exactly suits my tastes.  That they were fully decked for Pride weekend only warmed my affection further.

Blackfoot is certainly a victim of their own success at times.  Most any evening in the warmer months sees said deck in very high demand, and often avoid it when I otherwise would not because I enjoy both hearing my own thoughts and having the rampaging LB not trip the unsuspecting.  The foolproof way to enjoy prime time solitude in prime real estate is to go on a rainy or cold day, and dress for the weather.  If properly equipped the toddler never seems to mind, and you only need to drink fast enough that your beer will not become too diluted.

On this occasion I had their Baltic Porter, for the first time, a burly almost black lager, which at 8.9% (and $5 a pint) embodied everything strident about craft beer.  I filled our growler, and found out the next day that with dedication one could indeed down multiple consecutive pints, albeit with the expected consequences (namely, drunken and feeble erudition).  With Blackfoot my bed is made, and they’ll have to do a great deal before they cease to be a weekly feature in my routine.  That I have choices, and good choices in such things is a great endorsement of the current state of beer in Helena. 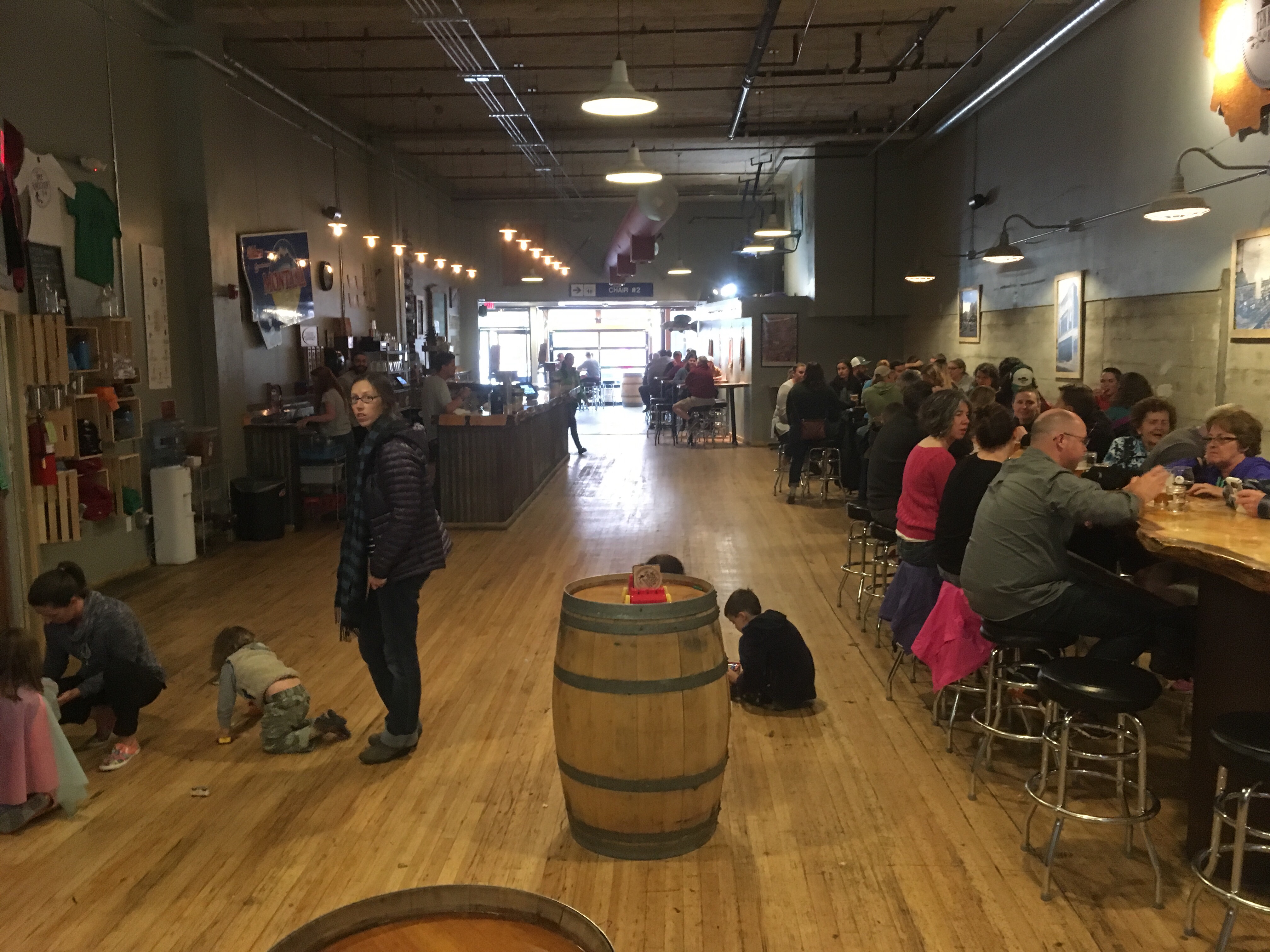 Last, we made our way to 10 Mile Creek.  10 Mile is slightly closer to us, and their beer almost, kinda as good as Blackfoot.  Their space, above, is certainly far larger, nicely unpacked with tables, and consistently excellent for both being able to maintain dialogue (internal or external) and allowing children to run (the toy shelf, just out of picture left, is always well stocked).  I had a coffee porter, as mentioned one of my consistent favorites, and it was satisfying, but not glowingly so, which could sum up my stance on 10 Mile as a whole.  Do they deserve being damned by faint praise?  They do not.  Is my opinion hopelessly skewed by the bias I chose a year or more ago?  Very possibly.  But it is what it is, and while I’d encourage anyone interested enough to have read this far to visit, when I take guests on a stroll which ends in a few pints, 10 Mile has never yet been the destination.

Sentiment is a fine spice.

The family made it home well in time for dinner, with my recently foggy head chemical cleared and primed for nostalgia.  The past year has been a bracing and excellent one, and our little jaunt around a green and rainy city had done well putting all of that on display.  Pubs are and have always been about community, and that doesn’t just mean that being buzzed makes it easier to be neighbourly (though it certainly does not not mean that, either).  Insofar as the human mind would never functionally exist without others in the general, metaphysical vicinity, a thing which highlights that, which wedges space into the cracks in routine, is important.  And in no small part due to a legal quirk, Montana breweries currently do that very well.

Cultural critique, N.O.S., The Adventures of Bear and Cloud
← New eyes
→ I need a posse