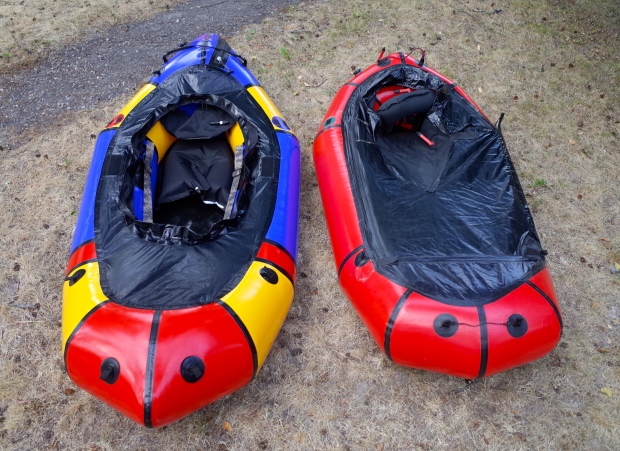 A year ago exactly I had a very good week; at the beginning of it I won a new raft at the Packraft Roundup, at the end of it Little Bear was born.  After a year of intermittent use I’ve finally gotten a good enough grasp of the new boat to say something meaningful about it. 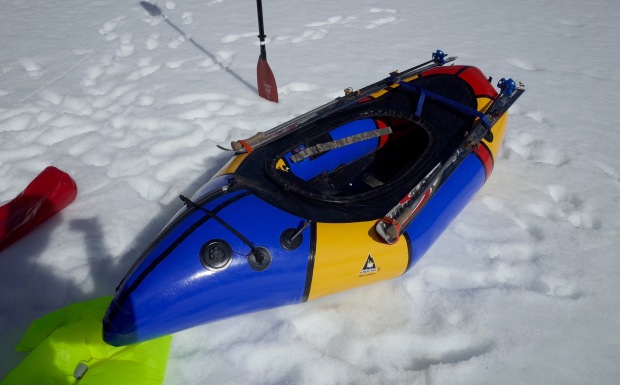 My 2015 Yukon Yak has a cargo fly and whitewater deck.  Before I ever put it in the water I glued in points for thigh straps, and rear attachments for skis.  I use a length of 5/8″ polypro webbing for a rear grab handle.  Before I go further, I should say that the dual loop ski lash points are the way to go, as they totally eliminate flop.  I’d also like to see Alpacka make thigh strap lash points a factory option.  Basic straps are an almost mandatory mod for whitewater, even the moderate whitewater I paddle, and while gluing these in yourself isn’t complicated (and is good repair practice) it does take time as well as expensive and nasty smelling glue.

My perspective on packrafting is that I do it as a wilderness activity, usually solo, and usually as a means to the end of a multiday traverse.  With time out limited by work and kiddo, I rarely choose to do a day packrafting trip, and it has been years since I took my packraft on a car-shuttled, “sidecountry” float.  I don’t have particularly developed whitewater skills, and due to the context I usually boat in I maintain a large safety buffer on moving water. All of this heavily influences what I want from a packraft. 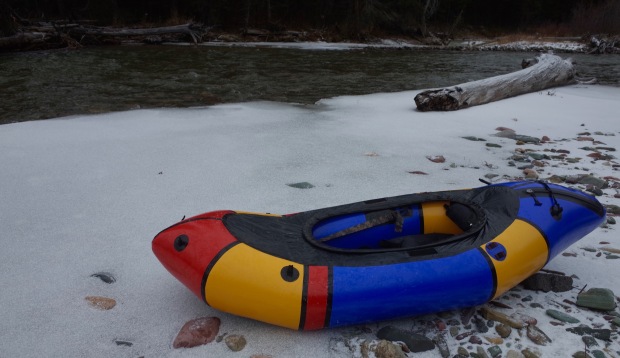 The 2015 Yak is heavier, and more significantly bulkier, than my 2010 Yak, and than I would prefer it to be.  The cargo zipper, extra material involved in the longer boat, and tubing which builds the combing of the whitewater deck all take up a lot of space.  More boat means a larger pack, which is heavier, gets hung up more easily, and so forth.  The advance of packraft performance has a substantial cost associated with it, something which is too infrequently highlighted.

That said, the performance improvements of the 2015 boat over the 2010 boat are enormous, and they apply in almost all circumstances.  It is hard to say they’re not worth the added weight, bulk, and indeed cost.

The longer boat is much faster than the old boat, both in a straight line and when accelerating.  Flatwater paddling and whitewater maneuvering are both massively improved.  The long stern vastly increases stability and hole-punching ability.  I saw all of these first hand, the flatwater speed was obvious in the 2012 Wilderness Classic when Luc Mehl and Josh Mumm easily pulled away from me on the lower Tasnuna, and the value of the long stern was plain when Spencer had a much easier time with the bucking waves of the North Fork of the Blackfoot two years ago.  Having these advantages on my side has been very welcome, and it would have been worth it a few years ago to sell my old boat and pay the difference to upgrade.

The whitewater deck is similarly functional, with reservations.  It’s a lot drier, and a lot warmer, than the cruiser deck.  The added warmth alone justifies the irritation associated with packing the pipes.  It was also nice to see that the deck is seam taped, which was my major complaint about the old deck.  Rigging the whitewater deck takes more time, and getting the skirt around the combing can be a pain with cold fingers, and the skirt does leak a bit and pool water occasionally, but overall it just plain works.

The cargo fly was a greater subject of my skepticism, but I have mostly been converted.  No question, arriving at the takeout with your pack not soaked is very nice, especially on a cold day.  It saves weight too.  Having the weight low and centered improves maneuverability in whitewater, and makes room for skis or a bike.  It is important, especially in more difficult whitewater or if you’ll be doing any portaging at all, to secure the cargo within the tubes so it can’t flop around.  The buckles on the Alpacka dry bags are well thought out in this respect, and with the Seek Outside Divide the bachelor buckles can be hooked to the webbing loops inside the boat.

On the other hand, the zipper does introduce a rather massive point of failure, and in spite of careful and proactive care I’m not at all convinced it won’t wear out well before other parts of the boat.  Whether that happens at all close to the time I’ll want to upgrade, I cannot say.  My zipper did develop a pinhole leak, which was easily fixed, but does not necessarily inspire confidence.

Rather then repeat my request for a ~4.5 pound all up decked boat for light wilderness stuff, I’ll thank Alpacka for making such a capable product.  It was almost startling a few days ago just how much easier the 2015 Yak made the more technical rapids.  That so much performance can be had out of such a light and small package is quite amazing, and while the packraft continues to mature as a product we users should not allow ourselves to forget how revolutionary (for reals) the original implementation of a durable, packable one person boat really, really was.