By the standards of past years I did not go hunting much in 2017, and in retrospect that proved the key to success.  Scarcity fostered focus, both in picking how to use my time and in using my time well once I got there, which is why the three hunting trips further than 20 miles from home were all multi-year projects-in-the-making and will all go down as trips of a lifetime. 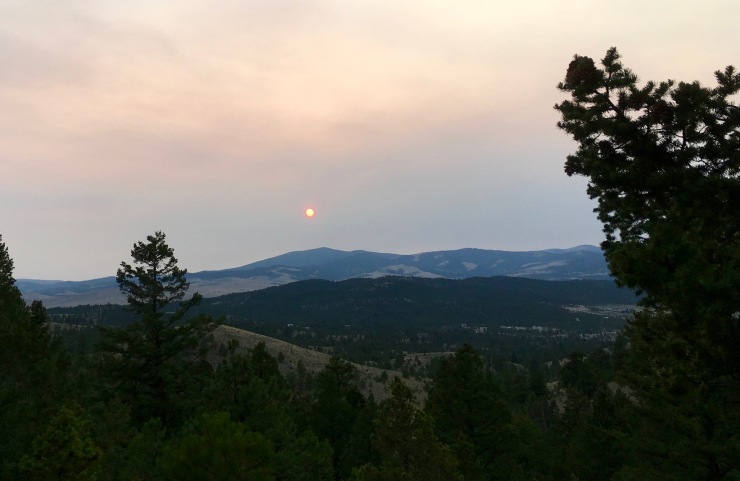 I got my sheep.

We canoed the Missouri, survived the winds, and killed two deer in one day.

And I got my elk, exactly like I wanted.

Beyond that, I snuck in a bowhunting trip during the very warm and hazy first weekend of September which was a bit bumbling but absent time commitments later that month would have laid the foundation for a decent chance at elk or deer.  I also managed a few local day trips, to pursue the very abundant local mule and whitetail deer.  These are worth mentioning both because the truly local opportunities are tremendous, as they often are in Montana, and because at first I had a hard time finding deer at all.  It was gratifying that my presumption concerning conditions ended up being correct; as autumn dried things out and then snow fell the mule deer concentrated in the few areas of clear ground.  Getting in range took multiple tries over multiple days (center fire rifles are forbidden due to proximity to town) but everything finally came together in early November.

The result of all this is that our freezer is slam full, and I learned more about this fall than in the previous three years put together.  It took that many years and that many hours afoot to be ready to see and hear the important things.

These lessons are prosaic, in the extreme for anyone who has done any hunting at all.  But that is the appeal of hunting; learning the rules takes a year or two, being able to consistently get them right takes a lifetime.  They are, as I currently understand them, as follows.

Stay put and glass; this helped me find and then refind the mule deer buck I eventually shot on our canoe trip, and showed me the sheep within an hour of the weather finally lifting.  A corollary here is to glass where the light leads you, as you’ll see more with outstanding life and a modest amount of game than the other side of the canyon with crap light and abundant game.  If you can plan well enough to be looking at the good areas during good light you’ll be generally ahead of schedule.

Don’t give up; this was crucial to persisting after 2 days of seeing no sheep, in a place I knew they’d be, and similarly vital for finding local deer after multiple trips seeing no ungulates at all.

Be in the right place at the right time, aka just be out there; luck in hunting is not a simple thing, but whatever form it takes is predicated upon going out where the animals are.  Fair chase means that ethical hunting can never be certain, but doing the best you know how for four days is twice as good as doing it for two.

Know where the animals might be; which is the most difficult and most crucial thing on this list, as well as the most difficult to articulate, which is why a key part of hunting well is the subject of so few articles.  With sheep I had the general area locked in from state documents.  Bighorns are a much studied and more importantly collared species, which means there is usually plenty of recent data available.  I confirmed this and got more recent feedback (last season) about herd location via a Google image search that led me to a thread on a birding website.  Once in the field it was down to looking with my own eyes and extrapolating from the previous three years hunting Bighorns.  Their preference for feeding near escape terrain, and what angle and aspect escape terrain general has, are all well documented in literature you can find and read for free from your home.  Similarly, I’ve gotten a decent handle on the sort of broken but not too steep terrain mule deer tend to prefer, and to a lesser extent where given the winds, temperature, and time of day they might be within that terrain.  Mulies like sun, but not too much, and prefer to avoid wind, until they just don’t care anymore.  When I made it up in to the North Fork of the Sun proper and saw just how much snow was present on even the most exposed slopes my eyes and plans switched quickly, and had me looking in the bottoms, which would be free from wind compacted snow, and along the south facing edges, which would have a little melt off.  And it was in exactly such a spot that I saw and shot an elk.

Be quick to shoot, but not too quick; I’ll never know how much longer that elk would have hung out feeding.  Maybe it would have been there for another 20 minutes, maybe another 30 seconds.  I took exactly enough time to get stable, but no more, something made relatively easy by lots of practice.  I shot my mule deer buck off hand at 60 yards, right as he took his first step away.  At that range I had about 2 seconds to act, which was barely enough.  On the other stand, I’m still haunted by what the hell happened with my first shot on that sheep, and will in the future be very hesitant to take steeply downward shots unless they are also fully broadside.

Last and most importantly, stick to your big goals and select quality over quantity.  Hunting is big deer, and shooting your first (or tenth) anything is a big deal.  Having pulled off two big species firsts this fall, after 5 and 3 years of trying, respectively, I have a hard time picturing regret had circumstances made me wait another year or two to make them happen as I wanted them too.  For me hunting should be a complete experience, and for the moment that means finding animals in big, wild landscapes.  Between the five animals I shot this fall I had 40 miles of loaded miles of walking to get them out, 35 of that between the sheep and elk (plus 15 miles of canoeing).  On every hunt save the local mule deer the meat spent at least one night hanging in the field before it was packed in a vehicle.  I always wanted to do things that way, it just took the years of building confidence in myself to really follow through with my own wishes.

The only things really left undone this fall were shooting a black bear, which I still have not done.  Indeed this was the first hunting season in four years without a black bear encounter that almost, and really ought to have resulted in a bear kill.  It is good to have something to look forward to.  I also missed having a shot at anything with my bow, but that game isn’t over; the local whitetail doe season runs through January 31st.

Hunting gear is properly seen as a big deal.  The added demands of finding an animal, shooting it, packing it out, and doing all of that in rougher terrain and often worse weather skew the standard a few levels beyond that of normal backpacking.  I’ve already written at length about the Seek Outside Revolution frame and the La Sportiva Trango Trk boots which both worked so well.  My optics setup was unchanged from years past; Meopta Meopro 6.5×32 binoculars, a Vortex Razor 50mm spotter, and a Vortex tripod with Outdoorsmans bino adaptor.  This all continued to work well, though the focus knob coming unglued in the middle of the sheep hunt was a nuisance.  I continue to want binos with more magnification, but I don’t think it makes that much difference, else I would have made them a priority and bought them.

My rain jacket, the BD Helio Alpine, is worth a mention for how relatively dry it kept me during the slogging wet of the sheep hunt.  It is far from faultless, and quite expensive, but the things it does well it does very well, and those happen to be the most important tasks (namely, keep water out while not impeding movement or vision).  I should also mention the Nano Air Light hoody, which I was wearing on every single successful hunt this fall and which as the temperature dropped kept impressing me more and more with the massive range of comfort it provides.

And last, I should mention the Seek Outside Big Sibling stove.  It’s been 3.5 years since this was for sale, and the few that are out in the world remain the lightest portable wood burning stoves by a considerable margin.  I don’t use mine more than 6ish times per year, but when I do (as I did on both nights of the elk hunt) the ability to eat dinner while warm and relaxed and go to sleep hot and dry is of massive benefit.  I hope it won’t go down as one of those great niche products which is almost impossible to find.  Every time I post about this SO gets a surge of inquiries about this thing, hopefully one day that will make for enough interest in revive it.

Naturally, the final question is, what next?  With application deadlines for special draws due within months it is not too early for this question.  A hunting season should have two planning bookends; the schedule should be just doable if you draw all the tags, while still having plenty of intrigue if you draw nothing.  With the Montana general deer and elk tags being what they are, namely good for both rifle and bow in almost every zone in the state, the limits of adventure are for the resident limited only by ones imagination.  I’ve shot deer in two of the three backcountry zones of the Bob, so rounding out that list is an obvious choice.  I’ll put in for my usual long shot mountain goat, moose, and bison tags, while considering whether to burn elk points on a premium archery hunt or buy an unlimited sheep tag.  It makes me a bit sad to consider not hunting sheep next year, and with newfound patience and a freezer that should still be well stocked next September, I’ll probably be willing to commit to that needle in a haystack hunt.  True desert mule deer in the Colorado Plateau canyons has also been a longstanding desire whose time may have finally come.  The Montana season is long, three solid months, but with life being what it is (I don’t care about hunting THAT much, after all) 4 quality trips is the absolute max that might happen, and 3 is more probable.

It’s a good thing when choosing wisely from too many good options is the biggest problem.