In Montana, when planning a trip during the lighter 7 months of the year I almost always do what I can to assess and predict conditions of the my chosen route, and adapt my gear and schedule to the anticipated.  Rivers too high or low for good floating, and very steep snow and ice, are the two major exceptions, which point more to my deficiencies in skill than anything else.

In winter my approach is the opposite.  I start with assumptions about what sort of travel conditions I want, and plan a route accordingly.  This is driven both by avalanche danger, and knowledge that in the backcountry the wrong snow can make each mile very slow, and do so in a shockingly wide range of ways. 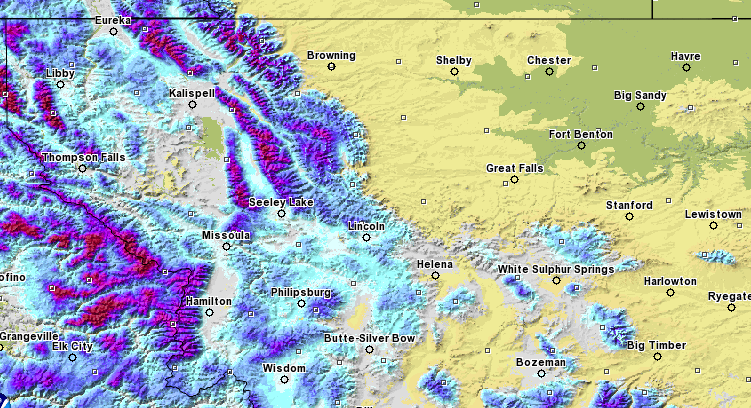 In a few days I want to head into and across the Bob, and having not been in there since October, my first stop is the NOHRSC snow modeling site, which generated the three maps immediately above and below.

As the big map shows, we’ve had an odd winter.  Lots of warm snaps and a few isolated, big storms have put a decent amount of frozen water up high, and kept it around in the less sunny parts of the state.  The more sunny parts of the Bob and Glacier have melted out entirely at lower elevations (below 5000′). 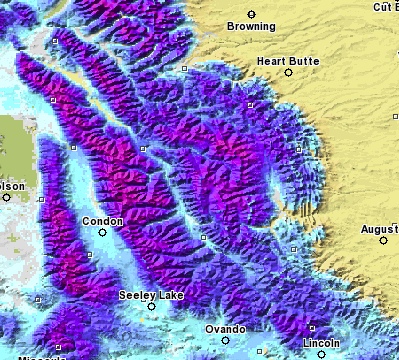 The first two maps show snow water equivalent, while the bottom map shows estimated snow depth.  Snotel remote monitoring stations are the next resource, and there data is central in building the NOHRSC model.  SWE and snow depth are measured using separate estimates, and when both are functioning correctly, disparities can give highly useful hints concerning the nature of the snowpack.  For instance, SWE staying constant while snow depth shrinks significantly is the classic spring sign of definitively consolidating snowpack.  Currently, we see that SWE and depth are more closely correlated in the Mission and Swan Ranges, while the Scapegoat and especially Rocky Mountain Front have significantly less SWE than the snow depth might suggest.  This snow is thus less wet/dense, which could make it easier to travel through, but could also make it less likely to cover up items such as deadfall and brush, and certainly make the cover more susceptible changes in atmospheric conditions.

Not all Snotel sights are equally useful for planning, as I discussed in detail several years ago.  As mentioned in that post, most of the Snotel sites in the Bob are at aspects and altitudes which limits their utility.  Badger Pass has been my go-to for a decade now, but with the area around it burning two years ago, the nature and thus generalizability of the data (to the past) has changed, and what I presume to be the increased exposure to wind has caused the precip spout to frequently rime closed and go off line, which explains the current lack of any readings, and the irregularity of snow depth readings over the past year.  SWE is measured via a pillow in the ground which read mass, and is thus under field conditions far less temperamental.

So let’s take Wood Creek as an example.  Located along the Benchmark road, in thickish timber, on a flat bench, and facing NNW, it’s a decent encapsulation of the snow you’d find in the general area (on, for instance, any of the passes traveling over the Divide between the Danaher/Blackfoot and Sun River drainages).  Currently there’s not much SWE (2.8 inches), just over a foot of snow, and max temps that last three days where into the 40s F.  It seems safe to assume that outside this sheltered location snow has been compacting and melting fairly quickly, especially for January.

In the immediate picture, thin and compacting snowpack with lots of sun exposure suggests open southerly aspects, and crusty, hard, thin snow otherwise.  Challenging, or just bad, ski conditions.  The generally meager snow everywhere, combined with lots of sunny interludes, suggests a touchy snowpack up high, with a recent avalanche fatality in the headwaters of the Teton River confirming that the usual hazards of a continental snowpack, buried weak layers and windloading, are more relevant than usual.  The forecast complicates the picture, with another three-four days of cold nights and warm, sunny days transitioning into what could develop into an extended period of cold snowfall.

The travel solution to all this is not obvious.  Down low, skiing would probably entail lots of transitions across bare spots, as well as unpleasantly fast and scary skiing on any sort of incline.  Up high, new snow could rapidly exacerbate dangerous conditions, while at mid elevations outside the Swan Range I don’t anticipate enough depth to make venturing off cut trails a practical option for making miles.  All of which adds up to me considering taking boots and snowshoes, rather than skis, on a trip across the Bob in January.  Which in another decade might not seem so unusual, which is itself not a nice thought.

As of right now I still haven’t made a decision on gear or route, and intractable ambiguity even in the face of modern data and lots of personal experience is what makes this all worthwhile.  I’m currently flipping back and forth between the current projections and those associated with past trips, hoping to make the best guess.