These poles have worked very well in the 5.5 years since I put them together.  They’ve been light enough, bomber, and the ability to swap lowers and have a pole longer enough for nordic skiing (or pitching a mid with a single pole) has been very handy. 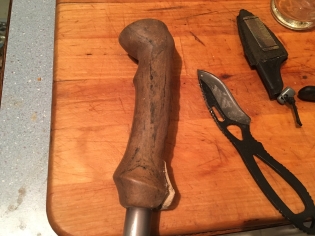 Shortcomings have been two fold.  While the grips themselves have aged well and certainly have the rest of the decade in them, the lack of a solid end plug resulted in dual issues.  The pole with less glue, at right, started working its way out the end of the grip around 3 years ago, and while strategic epoxy stopped progress, the end has never since been as comfy.  At left, the pole with the more solid glue cap bent over under the combined weight of a rain, snow and wind during a magical January night in Choprock Canyon two years ago.  I also want straps, a vaguely controversial admission.  This is mostly for nordic skiing, but after using the Fizan compacts over the past year and a half I’ve come to appreciate having the option of tying in and not dropping poles when I’m tired.

I couldn’t think of a clean way to integrate adjustable straps into the GGear grips, nor a totally satisfactory way to alleviate the above issues, so I looked elsewhere for a solution.  Massdrop ultimately sent me three different sets of Fizans trying to find a pair which didn’t slip (they all did, at least a hair), so I decided to sacrifice one. It took a lot of boiling, cutting, and work with pliers, but I separated the plastic core of the grip (above) from the rest of the pole.  The foam part of the grip was a loss, and the brittle alloy of the shaft made extracting it in one piece tricky (and required a LOT of the heat).  The OD of the BD upper is a bit bigger, but the plastic here is maleable enough that some inner sanding and a hammer got them seated. 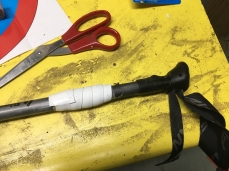 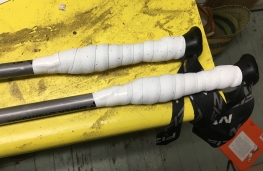 Next, the grip body.  In the same of simplicity and not leaving the house I used some leftover handlebar tape, doing a short wrap for the lower pommel, and then wrapping the whole thing with more.  If one had more tape and was so inclined, the fashionable grip extensions could be added.

I’ll update on longevity in a year or so.  My assumption is the tape will need replaced every few years, and my hope is that the plastic grip cap won’t ultimately split after being forced onto the pole.  Regardless of how well this arrangement works, these poles have been one of my more satisfying projects, in that they’ve been a simple and no-compromises solution to (literally) every trip across the seasons., one which has yet to be exceeded by anything commercial, and shows every sign of being equally relevant for another 5 or more years.

4 responses to “The perfect pole; revised”