A crucial attribute of windshirts, particularly for backcountry (which is to say, multiday) use is moisture retention and drying speed.  If the most common, indeed only criticism of windshirts as a concept is that they can be viewed as redundant relative to a waterproof hardshell, the rejoinder to that criticism is that unlike a hardshell, a windshirt can be left on almost all the time.  A good windshirt will have an ideal blend of breathability and weatherproofing for the given user and use case.  Drying quickly nicely accompanies breathability where garment utility is concerned, and minimal moisture retention reduced the penalty of using the windshirt as an extra layer when true waterproof protection is required.

My benchmark for a number of years has been a static soak and dry test.  In this case, I took four windshirts I regularly use, immersed them in a sink of water, vigorously kneeded them to ensure total saturation, then allowed them to sit drapped over a metal rack in a 62 degree (F) house for 3 hours.  Weight, dry, soaked, and at one hour intervals post soaking, was taken to the nearest 10th of an ounce.   The test subjects were: a Patagonia Stretch Terre Planing hoody, new three months ago, with significant potions of fabric removed from each side to bring in the torso diameter; a 2014 Black Diamond Alpine Start hoody, heavily used; a 2016 Rab Windveil, extensively used but with a good DWR still active; and a 2018 Patagonia Airshed pullover cut down to a vest, and with the chest pocket removed. 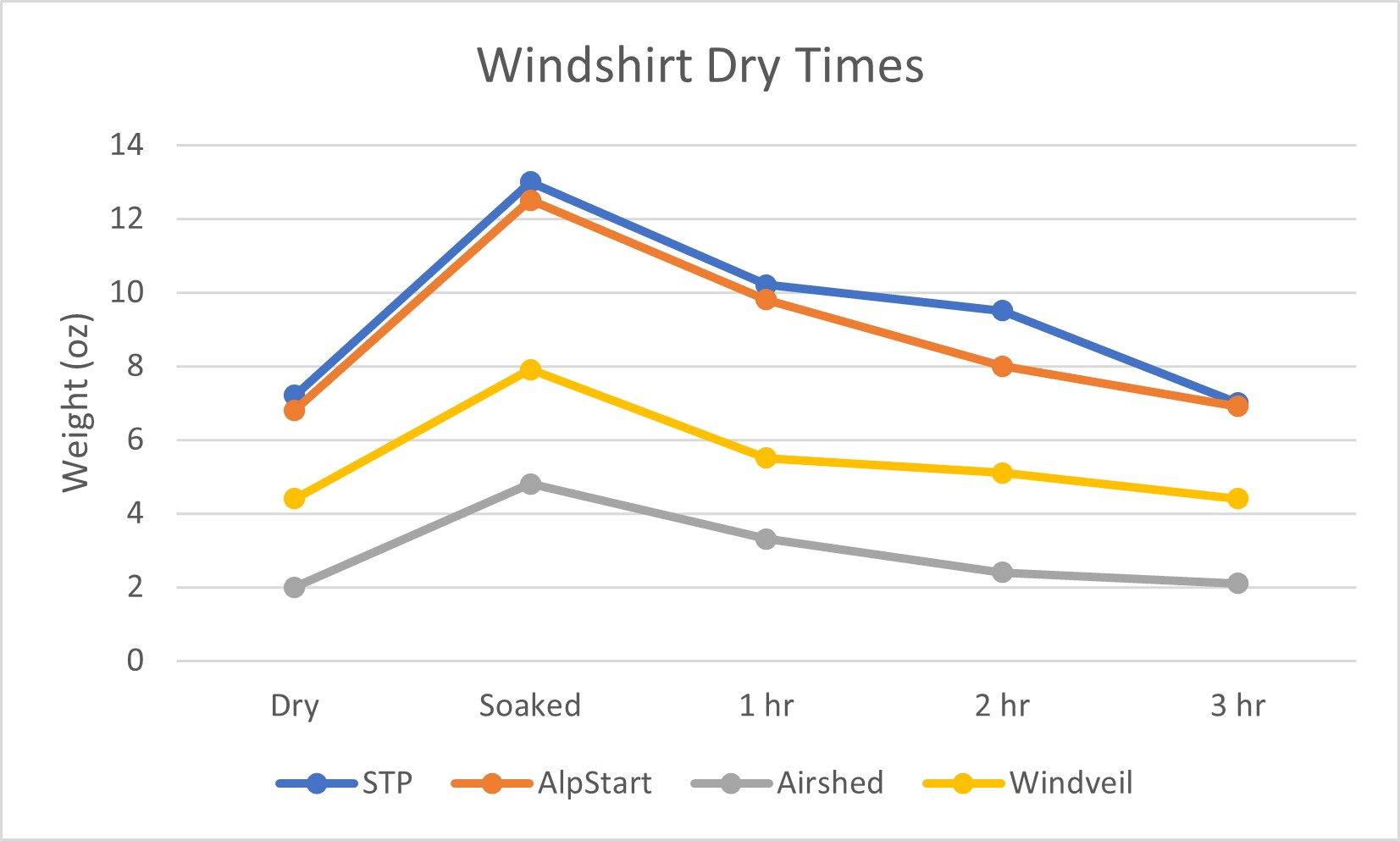 Dry time and moisture retention are, as will be discussed shortly, closely related but not the same thing.  Similarly, this test is not reflective of common field conditions, and ignores the more realistic metric of dry time while under the influence of body heat (i.e. while worn).  Years ago I ran the same test with both static and dynamic (worn) dry times, and found that while wearing the windshirt significantly accelerated dry times it did so at rates which hewed closely to those observed under static conditions.  Variations in the heat an individual can put out in a given situation, be that due to variances in metabolism, weather, or circumstances (i.e. how tired and depleted they might be) are going to be more relevant here than anything else.  A static test, such as this one, is more comfortable, less time consuming, and in my experience provides just as much actionable data.

On the face of it each of the four windshirts behaved similarly, soaking up a significant amount of water weight before taking 3 hours to become almost totally dry.  There are a few significant aberrations, the first one being that the Airshed gains significantly more than the other three when taken as a percentage of dry weight.  The Airshed gained 140% (2 oz up to 4.8), while the rest were in the 75-80% range.  This is surprising, and the difference cannot be entirely blamed on the double layer of stretch fabric at the back hem, which as the dry test went on stayed drastically wetter longer than the main Airshed fabric.  Indeed, the .4 oz from dry  at the 2 hour mark was by feel due entirely due to this strip of fabric.  So I need to replace this bit soon, and maybe that extra ~60% of gain was due to this little detail.

The other noteworthy variation is how much slower the STP hoody dried at hour 2, relative to the Alpine Start.  Judging by feel, this was due to the more elaborate detailing, namely the two lower hand pockets and associated layers of fabric, zipper, flaps, and so forth.  My biggest take away, or reminder, from this little project was that under those rare field conditions when things are getting soaked and resoaked, details like cuffs, hem complexity, and the number of pockets and flaps add up to make a big difference in dry time, and thus, warmth and overall functionality.  The project also taught me that advancements or changes in fabrics may have not amounted to substantive improvements in this area.  The Airshed fabric, on its own, may perhaps dry faster than similarly light fabrics, but I do not have the data to say so.  And while intuitively the STP fabric seems to retain less moisture in use than the Alpine Start, I need more information before I can say that is anything other than confirmation bias.

Seems like I need to do more laps around the block with drenched clothing.