One year later (backpacks for the woods, part 5)

One year ago I wrote a series of posts on packs for wilderness adventure.  I discussed how packs work, why we owned the packs we did at the time, and details of several of my own packs.  True to form, none of those larger packs are still in our possession.  This post will discuss why.

You might first start by reading or revisiting those posts from last year.

Than read about the two packs I made earlier this year, and have used extensively since: the larger Black & White pack (pictured above), and the smaller 610 pack (pictured below).

Comparative photos can be seen in the series below.  Both have undergone modifications since initial construction, each cross pollinating the others design, moving towards one set of features which seem to be most useful.

The shoulder straps on the 610 got replaced pretty quickly with Osprey Talon straps, which after adding a daisy down the middle of the upper section (to prevent stretching) are perfect.  Even than the shoulder strap webbing chaffed under my arm, it took me far too long to figure out that its position on the side of the pack combined with the packs narrowness did not work.  So I tore out the bottom of the side seams, cut the webbing off, resewed it to a fin of fabric, and stitched the mess back together.  This solved that issue.  The final was to do away with the single top strap, and add a v-strap of 3/4″ webbing.  1/2″ webbing is perfectly strong in this application, but doesn’t provide enough friction to keep things like foam mats in place (see above).  The v-strap works much better, and adds a bit of compression because the lower buckle can be moved up and down the daisy chain to suit the volume of the load.

Modifications to the B&W were more extensive.  I figured out quickly that the way I tapered the side panels was ineffective, while what I did with the 610 worked great.  In essence you want the lines above and below the shoulder strap attachment point to be parallel, but the part above your shoulder to be closer towards your body.  This taper goes in an inch or two over a run of 4-6 inches.  It helps a full pack sit well.  I also ditched the overly complex shoulder harness, which didn’t work well and retained too much water, and went with another set of Talon straps.  I also lengthened the torso by over an inch in this process.  As the first photo below shows, I finally have the fit dialed (that photo is without a belt, btw).  I’ve been playing with different belts on the B&W, but that is a subject for another post.  The velcro lumbar pad has been great, both for load support and letting me experiment.  Finally, the internal compression strap was attached too high on the front panel.  This attachment was moved downwards quite a bit, and for a variety of reason I ended up laminating a piece of VX-21 inside the panel to anchor the strap and add stiffness.  You can see the indent it creates in the first photo, above.  The internal compression strap works, but I’m not convinced it works well enough to be worth the trouble. 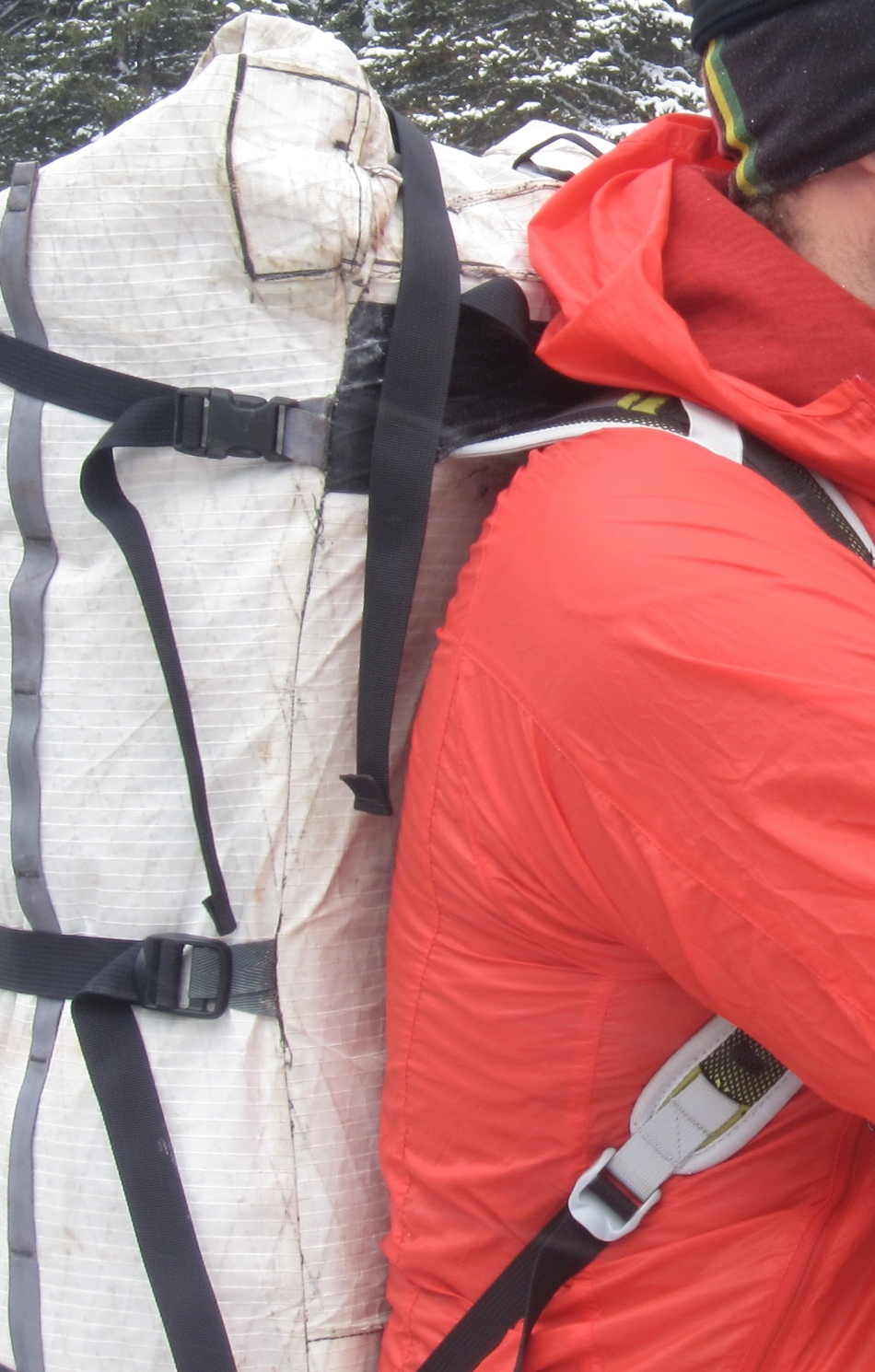 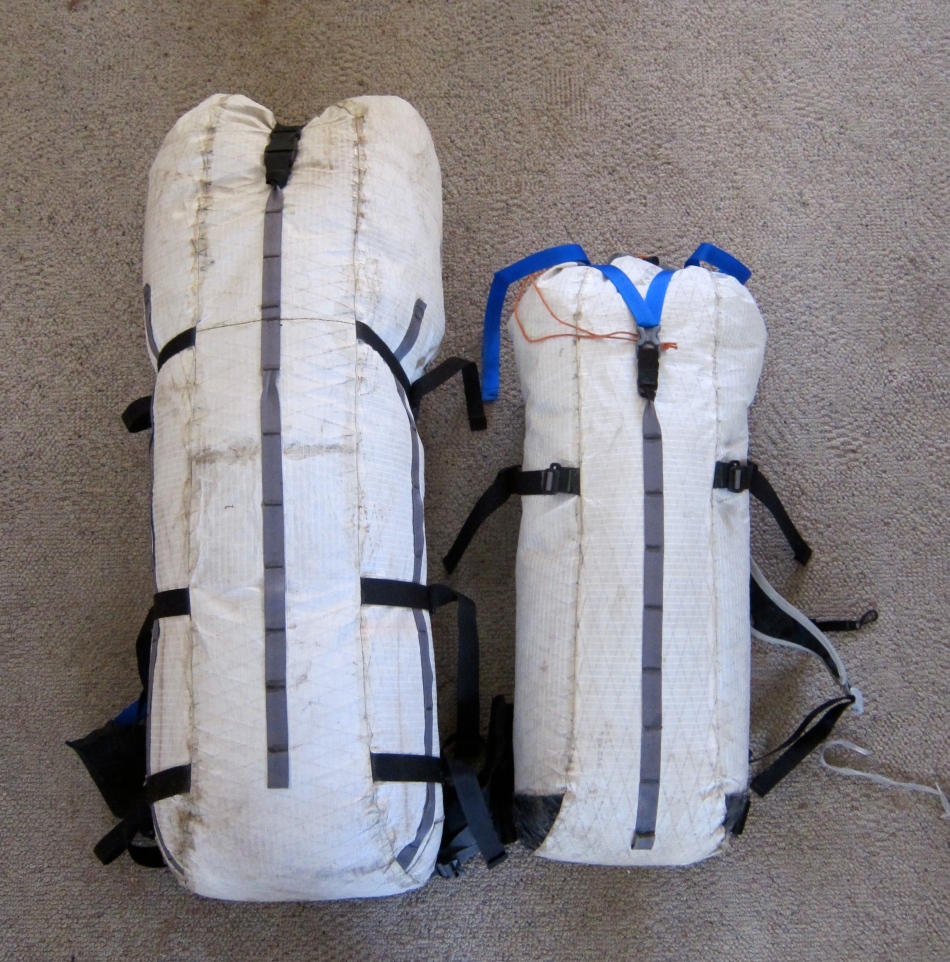 As is easy to see, the torso length of the smaller pack is shorter than on the B&W.  This works well because I’m not likely to carry much of a load in the 610 (the waist belt is more for stability than much load transfer, and most of the time I remove it), and because a slightly shorter torso length with more shoulder strap wrap is better for scrambling and other athletic movement.  For example, on the 610 the pack moves less when I reach high or far with one arm.

The triple compression straps on the B&W aren’t strictly necessary, but they do a great job cinching down smaller loads, and when carrying things like skis or a rifle three is much more secure and stable than two.  I made the top compression strap on the 610 removable after the fact, and while I leave it on most of the time, if I had it to do over I’d leave off the strap entirely and just put a few loops of thin webbing in the seams.  With a pack this skinny, compression is rarely needed.

The triple daisies on the B&W pack have been rarely used, but when needed they’ve been indispensable, and can adapt to carry just about anything.  A better arrangement than a beavertail pocket if it’s not a feature that will be routinely used.

The contoured, tapering construction of the pack makes it carry really well.  Weight gets tipped towards you by the structure of the pack itself.  It also slips through brush well (if it isn’t too tall!), and the bottom edges are much less likely to get hung up while scrambling.  The downside is that this profile gives up a lot of interior capacity versus a more rectangular cross section.  I lost a fair amount of capacity in the lower body of the B&W when I revised the side panel profile, and it’s thus a little smaller than I had wanted it to be.  Rarely do I fill it, but carrying a big load makes it tall which is sometimes less than ideal (Wilderness Classic).

Ripping the shoulder harness out of the B&W back in early August did a lot of damage to the fabric, but I found that a few thin coats of Shoe-Goo sets that aright.  And finally, the top v-strap arrangement is very effective.  I place two adjustable buckles down near the shoulder harness, and as seen below affix the other buckle by girth hitching it through the daisy chain.  This allows me to move that buckle up and down depending on load size, and therefore I don’t need a ton of strappage which will hang loose and flap in the wind when the pack is smaller. 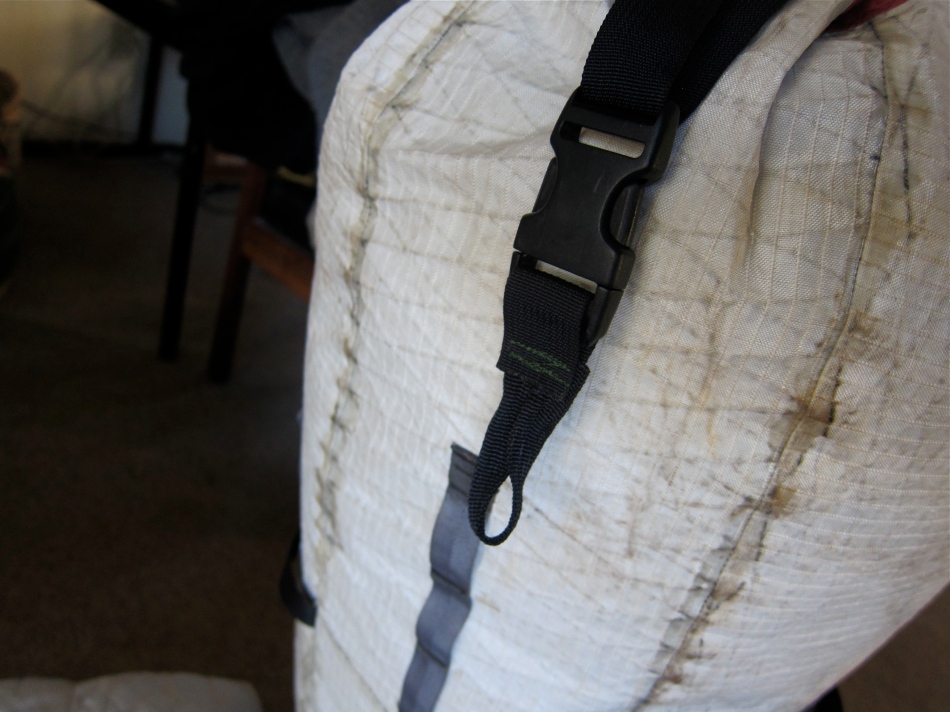 These are definitely the best packs I’ve made, and it is amusing to think how much the B&W pack has come pack to resemble that first pack I made back in the spring of 2009.  My understanding of fit and construction is much more sophisticated, but my preferences in features and pack size haven’t changed too much.  In fact, the B&W feels dangerously close to final design, which I’d almost be willing to make and sell occasionally if producing good shoulder straps wouldn’t be so impossible.

As always, feel free to ask questions, and to borrow any of this in your own work.

Photo added below to explain the side panel revision discussed. 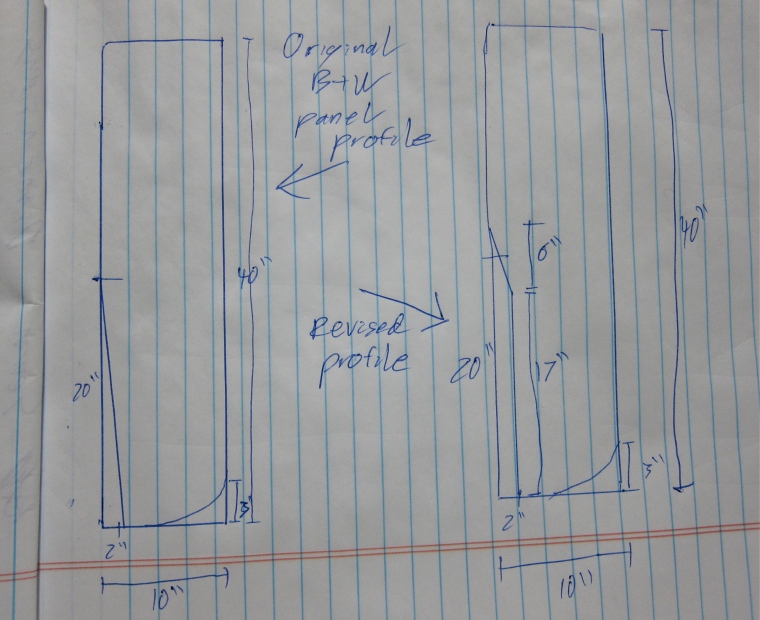 15 responses to “One year later (backpacks for the woods, part 5)”