There remains some confusion about how to make a backpack lightweight, and yet still functional.  The simplest and best way remains to raise your own bar; get better at packing, need fewer things, need lighter things, and so forth.  But this can be a hard end to maintain, as I have recently been reminded, and while it can be delightful to sacrifice efficiency at the alter of purity, doing so is not a sustainable end.  To whit, it is a good idea for a backpack to have some (or at least, the correct) external features, though as I discussed years ago features do add up in weight.

Kean observers will recall this video from last year, where I took scissors to a Divide and cut off all that seemed practical.  My scrap pile weighed 4.5 ounces; as many observed not a good reward for the effort expended.  The X42 Divide comes in a little north of 3 pounds as it ships, a figure far enough over the 2 pound magic mark of ~50 liter ultralight packs that it has been the subject of much consternation.  Fully half that 3 pounds is the frame, hipbelt, and shoulder harness, leaving 24ish ounces to account for the bag itself.  A few ounces of that is tied up in the buckles and webbing which adjust the harness, but as my demonstration showed, there really isn’t much fat available for the scalpel. 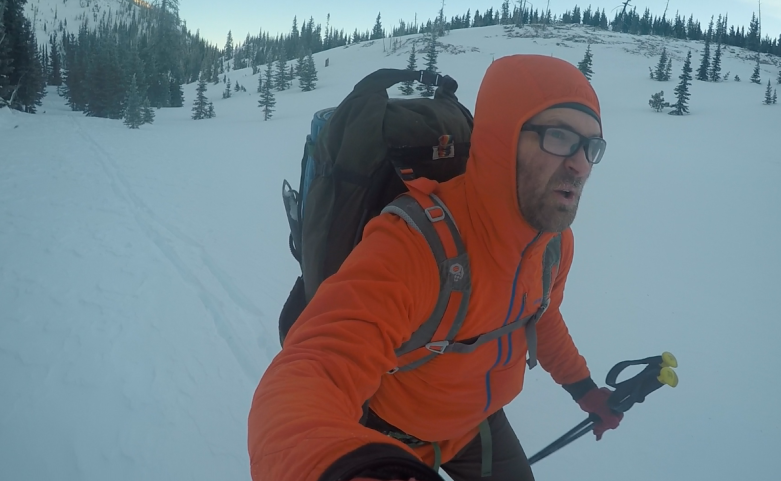 My curiosity came full circle a few weeks ago, when I removed those adjustment buckles and sewed my final set of Mountain Hardwear straps (directly) to this much traveled Divide.  These straps are a good bit burlier, and thus heavier and (and is often, but not always, the case) more comfortable than the Seek Outside harness, so it should come as no surprise that they offer little in the way of weight savings.  The pack now weighs 2 pounds and 14 ounces, which discounts all the above features, but includes a pair of 1″ straps and quick release buckles I added across the back.  These do well holding bigger things like ice axes, foam pads, and skis, and are my preferred rig for external attachment.

So what is the point of all this?  First, I finally have a firm answer to how you’d make fixed shoulder straps work with a frame as rigid as that on the SO.  The attachment point is down towards the base of my shoulder straps, which in concert with the load lifters allow enough distance between my shoulders and the pack that I do not feel at all constrained.  Relative to the stock adjustable shoulder harness sewn on shoulder straps offer considerable less wiggle room for matching individual shoulder shape to the stock frame curvature, which is the most substantial downside of tubular metal frames which are for all intents not really able to be modified by the end user.  With straps of equal materials sewn of does offer a consequential (~3 ounces) savings over an adjustable harness, so there is that.

Second, this experiment begs all sorts of questions about lower weight limits with various approaches to putting a frame in a pack.  The SO frame is absolutely rigid under 100 pounds, something that works very well at 50 pounds, and even 25.  I’ve never  in the past four years of using them thought that the SO frame system had too much load carrying ability.  I have thought it had too much bulk and width, which is a trickier thing to negotiate, as the width allows the frame to wrap around your back, which makes loads very stable indeed.   This remains an undersold aspect of the SO system, how well they work in technical situations.  I’ve used packs with more stability, that I’d have rather used on something like last weekends ski descent, but nothing that I’d rather have used if I’d have had to carry a bulky 25 pounds of winter gear.  There are systems which are better tuned read, not overkill) to moderate loads than the SO frame, but the ancillary benefits of the later goes a very large way towards making up for that excess.

Third, making a light pack not only requires attention to obvious things like balancing minimalism and utility, and selecting materials which will carry the load intended.  Ergonomics and stability are more ineffable, but no less important.    They’re also more subject to individual fit and preference, which is from a design perspective more ambiguous.