The ‘mid I’ve been looking for

Disclaimer: Seek Outside gave me the shelter discussed below for free in exchange for feedback.

[12/2016 update: the BT2 is now the Silvertip, with modest but significant revisions which make it more friendly to taller folks, and more likely to pitch with one long trekking pole.] 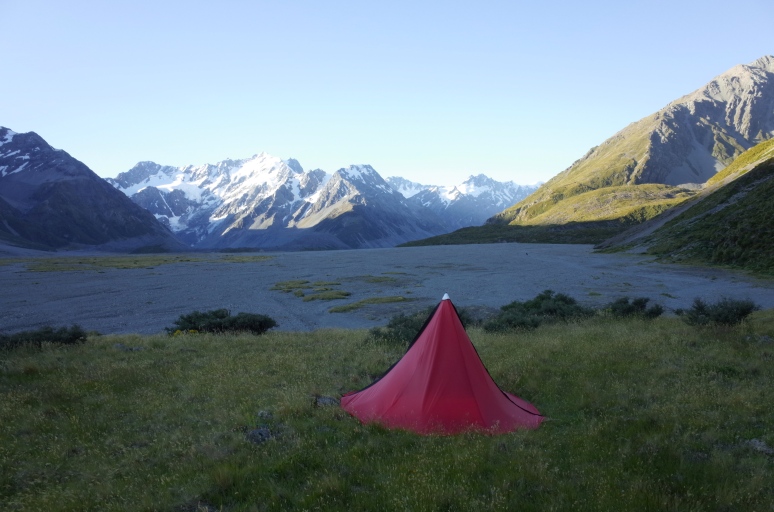 It’s illustrative to think back to the first “cottage” shelter I purchased, one of the first MLD Trailstars, in September of 2009. I was still so little initiated in the ultralight world that I emailed Ron Bell about making one of 70D sil, to which he in essence replied “what the hell for?”  That shelter hung around the closet for a long time, eventually going down the road some time in 2011 or 2012, mostly due to the large footprint, awkward pitch, and modest interior space.

The Trailstar made it’s name with an unmatched weight to wind resistance ratio, and it survived what is still the windiest night I’ve ever spent outside remarkably quietly once I had it well staked.  That windproofing doesn’t just come from good construction, though that it a big part of it, but from a low and aerodynamic shape.  The conundrum is how to approach that degree of windproofing while also having good snow shedding abilities, traits which in ‘mids and tarp shelters seem to be at odds, especially when you introduce the further contradictory requirements of having a relatively small footprint and at the same time decent interior living space.  Oh, and it’d be nice to seal out those pesky drafts along the bottom, while still keeping the ability to raise the hem and vent as needed. 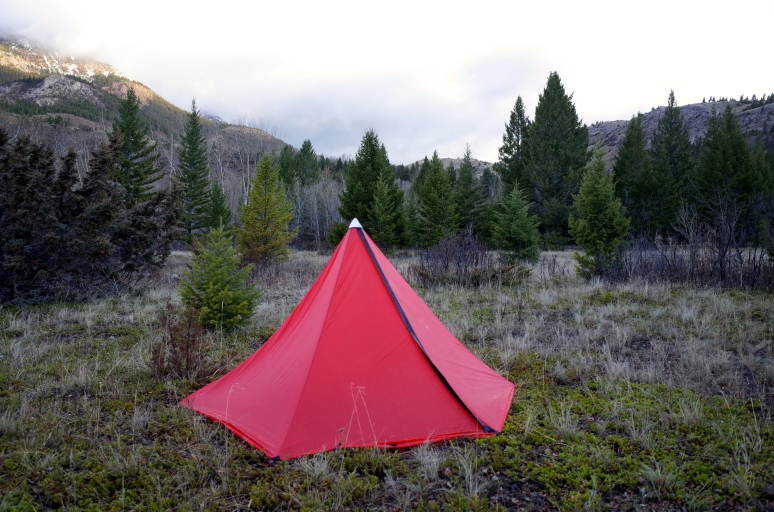 Thankfully, it is now 2015, and Seek Outside managed to balance all of the above in the Beyond Timberline 2 person tipi, more simply known as the BT2.

The BT2 is as simple and stripped down as possible.  Seek Outside calls it “a purpose built ultralight, storm worthy, backpacking  shelter to help you to go lighter and go further in difficult terrain” and this is a good starting point for analysis.  It’s made of 30D silnylon, which has rightfully become the standard modern shelter fabric.  It’s a symmetrical hexagon, 64 inches (162cm) tall at the peak when pitched tight to the ground.  It is 108 inches wide zipper to zipper (or corner to corner), and 96 inches side to side.  It has a double-reinforced apex cone of DX40 (read: massively puncture resistant) with interior and exterior hang loops, dual doors which open via #8 non-waterproof metal YKK zippers (read: the smoothest, strongest zipper made), with sliders at both the top and bottom.  The zipper flap is a piece of 2″ grosgrain webbing with three velcro patches to keep it closed. 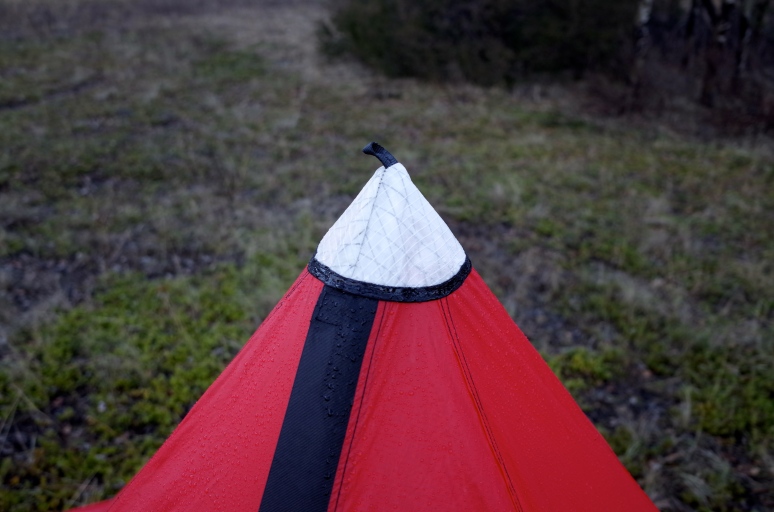 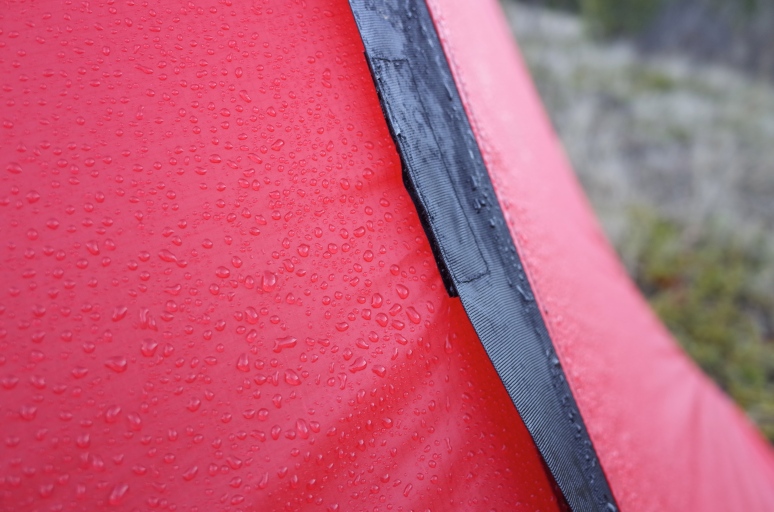 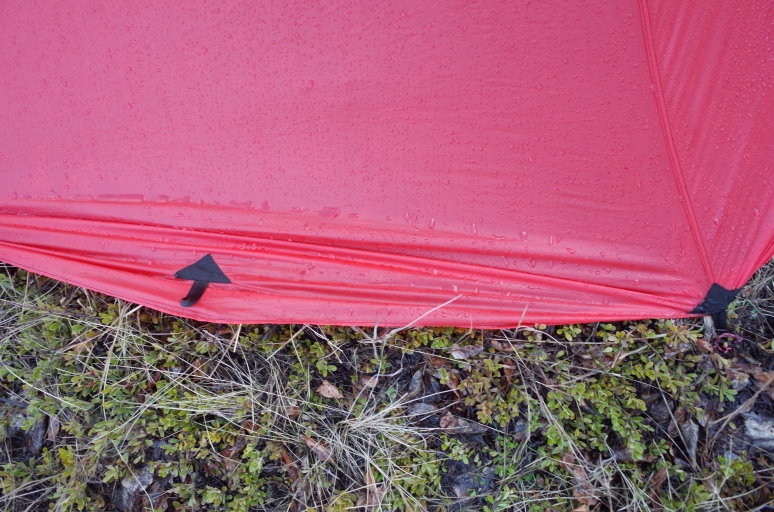 This feature is significant for two reasons.   If you stake the BT2 down with the exterior loops, as is most natural, and especially if you use all twelve of the loops, the extra 4″ of silnylon will be tucked under into the interior of the shelter, forming a sod cloth or snow flap which is totally effective in sealing out all wind, as well as almost all flying insects.  Every other mid I’ve owned was cursed by massive drafts in cold winds when there was not enough snow on the ground to pile up over the bottom edge.  Seek Outside has solved this problem in a simple fashion which adds almost no weight to the shelter, and almost no complexity (read: $$) to the production process.  If you want ventilation, stake the shelter using the interior loops, and raise the pole a bit.  If you want more ventilation, extent some of the loops with a bit of cord.

Kevin Timm of Seek Outside also told me, a while ago, that the sod cloth feature helped solve another problem with silnylon shelters; sagging when wet.  Because the tie points are not loaded along a sewn and stretch-less seam, a greater degree of elasticity is preserved within the shelter system, and sagging after a night of rain is much reduced.  It is not eliminated, but I’d estimate that it is reduced by around 50%.  After a night of hard rain a further 1/2″ or so of height in the center pole brings the BT2 back up to ideal tautness. 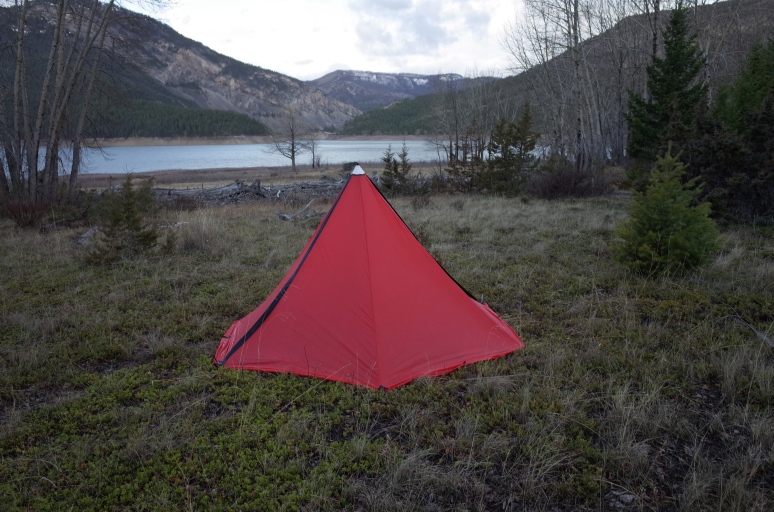 Pitching the BT2 is not as fast as with a square or rectangular mid, but it is darn close.  The basic hexagonal pitch shown above is the default, and good for any sort of “normal” weather.  Stakes the non-zippered corner points in a rectangle with a hair of slack between each point, insert pole and tension, stakes zipper corners, then bring pole to complete tension, and done.  A ~1 minute solo pitch is easily done after the first few attempts. 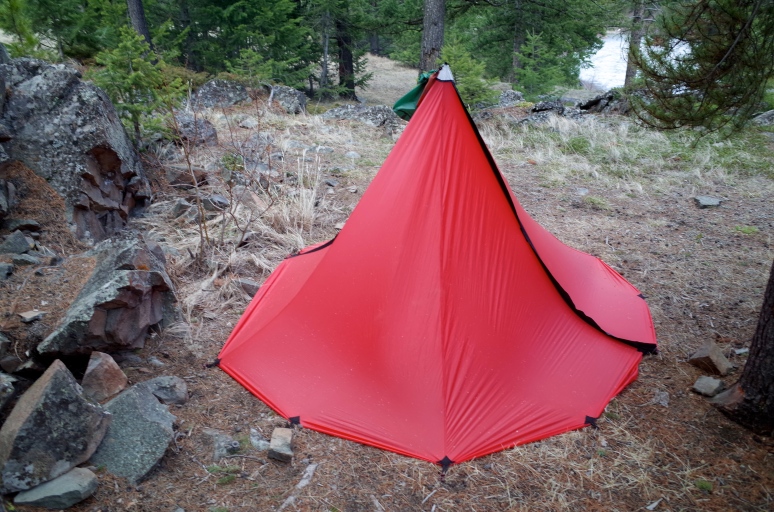 The BT2 has mid-panel stake points throughout, and by using each of theses and pulling them tight after the initial pitching the shape become aggressively conical and the BT2 becomes miniature tipi shelter.  As I wrote a few years ago this lack of vertical corners facilitates windproofing, something the BT2 does exceedingly well.  It equals the MLD Solomid in this area, and comes darn close to the Trailstar, while providing a lot more interior space.  Thus far the winter of 2014-15 has not cooperated and given me a big snowstorm on a trip, but I’m confident the BT2 will do just fine in that area. 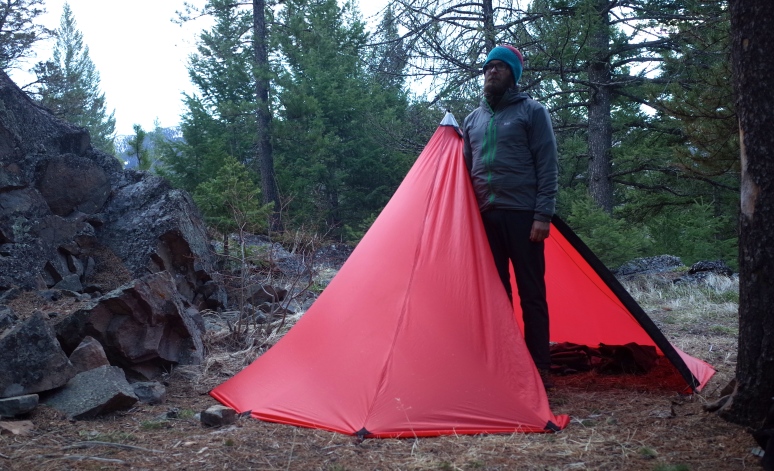 All that said, it’s important to bear in mind that the BT2 is not a large shelter, nor designed to be a palace for playing cards and waiting out weather.  For one comparison, see the above photo and know that I’m 5’11”. For another, consider that the 108″ corner to corner length of the BT2 is equal to the actual width of the BD Megalight (BD still modestly claims 86″, which accurately reflects the useable width), the length of the MLD Solomid, and is just shy of the 103″ length of the old Golite Shangrila 2.  It’s well shy of the 110-140″ length of the Trailstar.  The BT2 is in it’s 96″ functional length shorter than almost all other comparable mids, a feat it accomplishes by keeping the walls steep.  I have plenty of space to avoid the walls with both the head and foot of my sleeping bag, but again I’m 5’11”.  If you are 6’5″ and sleep atop a 3″ air mat you might push the available length pretty close. 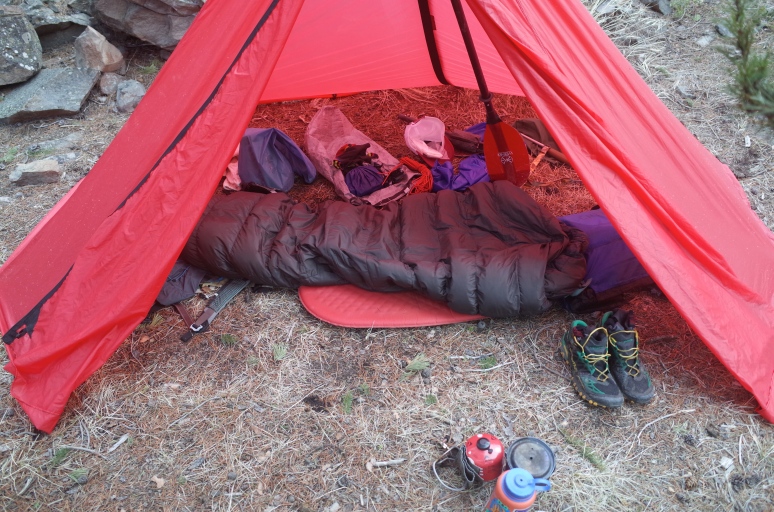 At 25 ounces for the canopy, the BT2 is light enough and small enough to be a reasonable solo shelter in bad weather.  It fits two no problem, though with only modest room to spare.  Seek Outside makes a nice nest for the BT2 in case of serious bug pressure, but with the sod clothes most won’t need it.  A nice side benefit of the nest is that the walls are high enough, and set far enough from the shelter canopy, that you’re protected from condensation.

Condensation deserves a word, as it’s an inevitable fact of life in single wall shelters.  Vent properly, and anticipate conditions, and you should be able to avoid the worst of it.  The camp pictured immediately above was cold and close to a river, ideal moisture conditions.  It was also blowing 30-40 mph and gusting a bit of snow all night, so fully battening down the hatches and just venting the bottom of the down wind door about 8 inches kept it to a minimum.  The night before, pictured further up, was also close to a lot of water, had more modest winds, and a few torrential rain showers in the early morning.  I left both doors 1/3 open for most of the night, which gave me enough shelter when the rain came up and plenty of ventilation.  Proactive, thoughtful technique works much better than built in vents, which unless they’re really big (Shagrila 2, Seek Outside’s LBO) do just about nothing.

The BT2 is a backpackers shelter, not a campers tent.  It prioritizes function and has just enough convenience to not impede useability.  Beyond the foul weather performance, which I’ve found simply exceptional, I find the minimalist aesthetic hugely appealing.  Based on the first four months of use, I’d say that the BT2 is perfect, and haven’t found a single improvement to suggest to Seek Outside.  And that is a rare thing.

The downsides are minimal and inherent: it’s a floorless shelter, which some folks don’t like.  It requires a pole height which is taller than almost all trekking poles, thus requiring a paddle, specialized pole, or two poles lashed together.  It does not offer an excess of space or feel-good features.  It just offers function, and if that is what you like, you’ll probably want a BT2.  For 230 bucks and a bomber, made in the USA shelter, that is a bargain.

41 responses to “The ‘mid I’ve been looking for”