This post and the follow-up a year later have remained among my most popular works, and with 2018 coming into focus they are at last worth updating.  Not too much has changed in the world of backpack fabrics, but time has allowed for enough clarification that a few things are worth saying again.  There are even some new trends to highlight.

Context matters.  I’ve taken plenty of flack over the years for denigrating trail and thru hiking as a useful design metric for backpacks.  This is a statement I still endorse, but do not mistake holding something up as a metric as equivalent to it being the most frequent or likely use.  Plenty of people get along just fine with fabrics I dislike, and unless you really want to count grams current technology makes producing a good, light, functional trail pack simple.  My own interest has always been, putting the outlier of canyoneering aside, in making and using packs which are as light and functional as the best modern packs, and tough enough for trips like this. 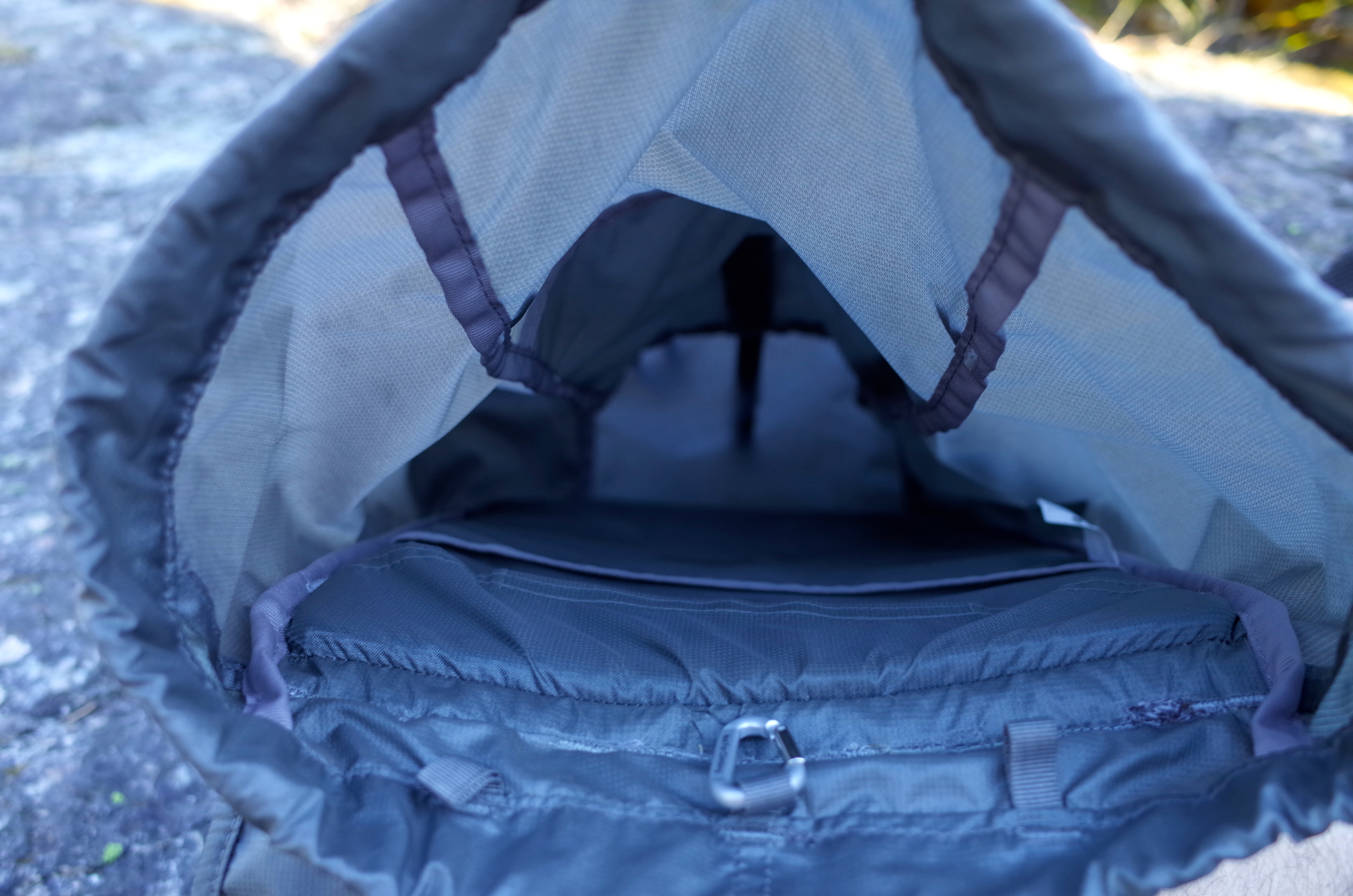 Nylon ripstop on the Gossamer Gear Type 2 (above) and Osprey Rev 18 (below).  Relatively cheap, certainly light, and for small packs durable for years of reasonable use.  Lighter packs carry lighter loads, can thus usually expect more careful handling, and thus can often get away with lighter fabrics, even if they are used most often. 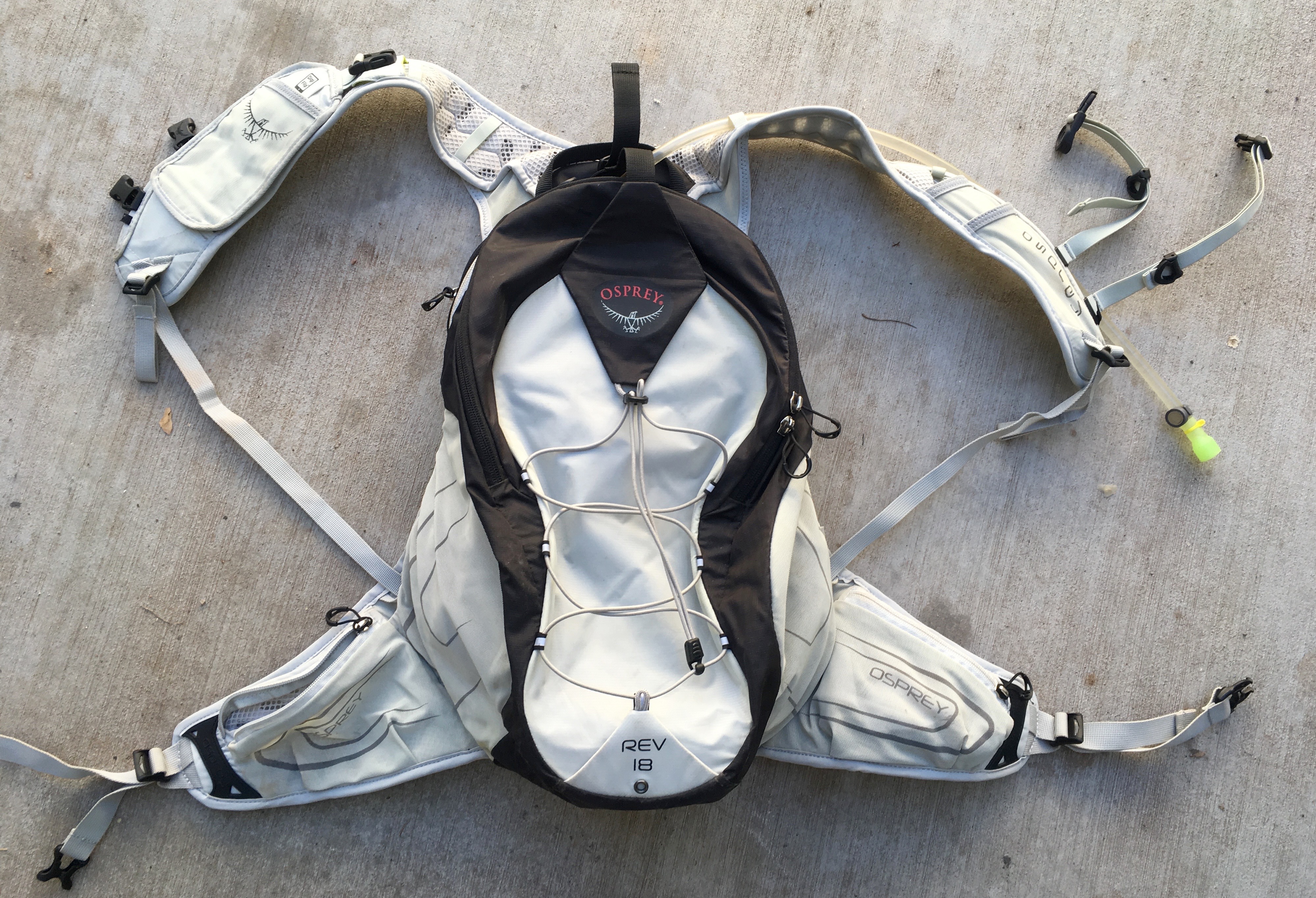 Pack fabrics can still be separated into two categories depending upon what waterproof coating they have stuck to their backs.  Polyurethene remains the most common, by far, and provides predictable and in many cases quite satisfactory performance.  The strengths of PU coated fabrics are lower prices, a more supple hand, and a lower amount of weight given over to the coating itself.  The downsides are the eventual degradation of the coating, the fact that most PU fabrics are waterproof to a degree which can be reliably if not commonly exceeded in field conditions, and that applying the coating weakens the fabric.  No one is complaining about the tear strength of something like 330D cordura, but I do believe that attribute of hot-application coatings is why they’re not more liberally applied (which would solve the waterproofing issue).  The quality of PU coating varied drastically, from very good to utter crap, which muddies things for both the home maker and the person just wanting to buy a good pack in the shops.

Laminate fabrics such a hybrid cubens and the various Dimension-Polyant fabrics are the second option.  If I were making a canyoneering pack I’d pick a PU fabric like 1000D cordura without hesitation, as the added weight and waterproofing given by a laminate just doesn’t make sense, especially in the face of no current laminate fabric being adequately durable for such use.  I used several test packs made from X51 (500/1000D cordura) last year, including for this two day excursion and even with careful packing 2 days and five canyons had the X51 on the edge of destruction.  For mountain backpacking, especially outside summer, the added waterproofing and weight of laminate fabrics makes them justifiable. 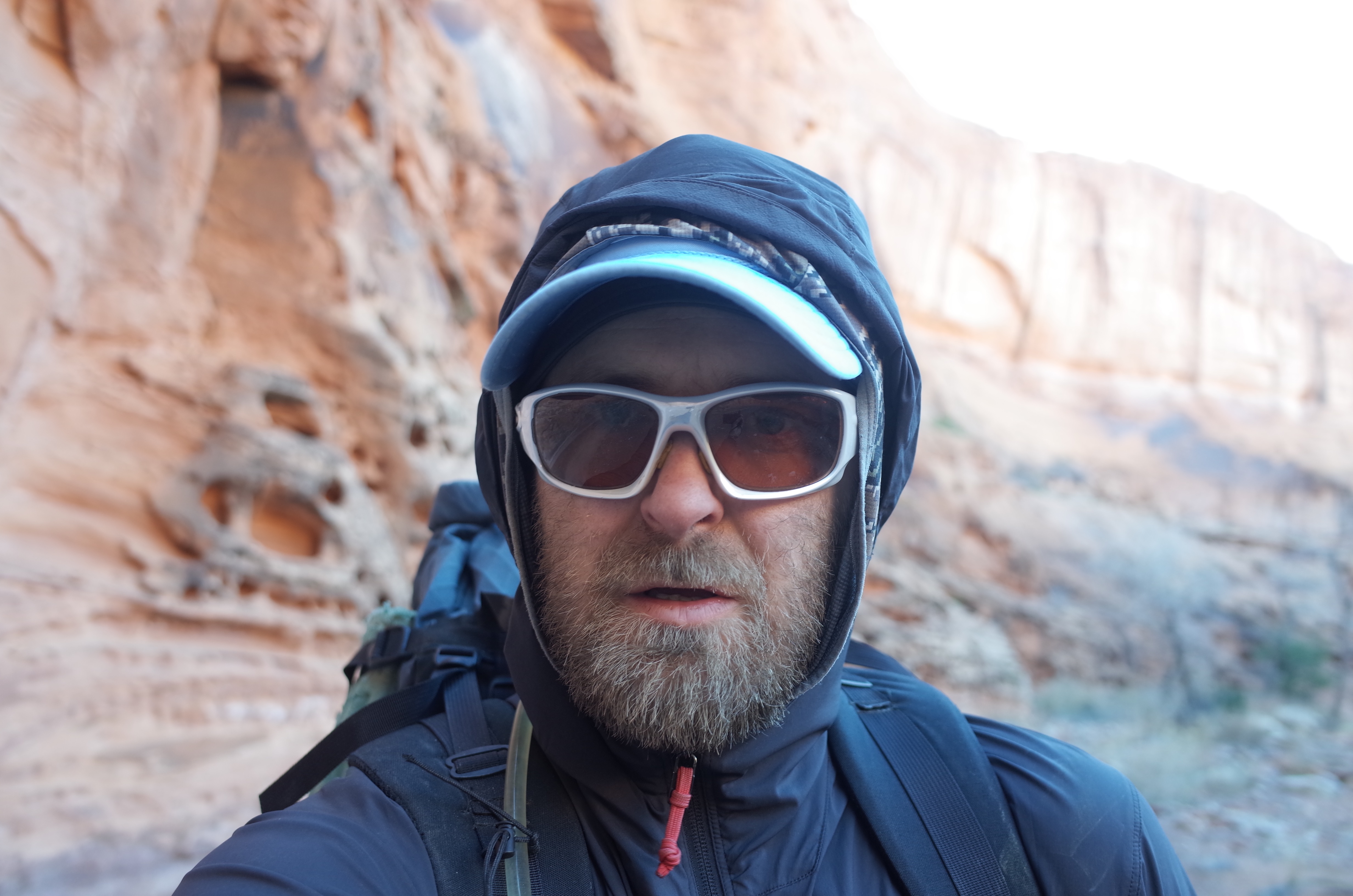 Cold and knackered along the Escalante in January.  Canyons beat up packs like little else. Laminate fabrics dedicate a greater percentage of their weights to the waterproofing layer, relative to PU fabrics.  I think the later makes more sense in the desert, for this reason.

Why aren’t many (any?) more commercial packs available in laminate fabrics?  First, the fabrics are more expensive, and needle holes which don’t self heal is I still assume a burden in mass production.  Second, D-P laminates face fabrics they don’t themselves produce in in the US, which means that a Chinese or Korean made cordura would be woven on one side of the Pacific, laminated on another, then shipped back again to be cut and sewn into packs.  Last, and most obviously why the first two hurdles haven’t been overcome, it is more difficult to articulate to the masses how your pack is more waterproof than other supposedly waterproof packs, and yet still is not submersible.  Plenty of people are trying to change these dynamics, and 2018 has the best chance yet of one succeeding. Abrasion in 1.3 oz pure cuben (above) and 150D hybrid cuben and VX42 (below).  Pure cuben isn’t reasonable for use in a pack, and the above photo show how easily the strong reinforcing fibers and weak mylar film are easily separated from each other.  The pack below is almost 4 years old, and has been a good test for how the two wear.  The cuben body is fine, but keeping it that way has taken lots of tape and aquaseal. 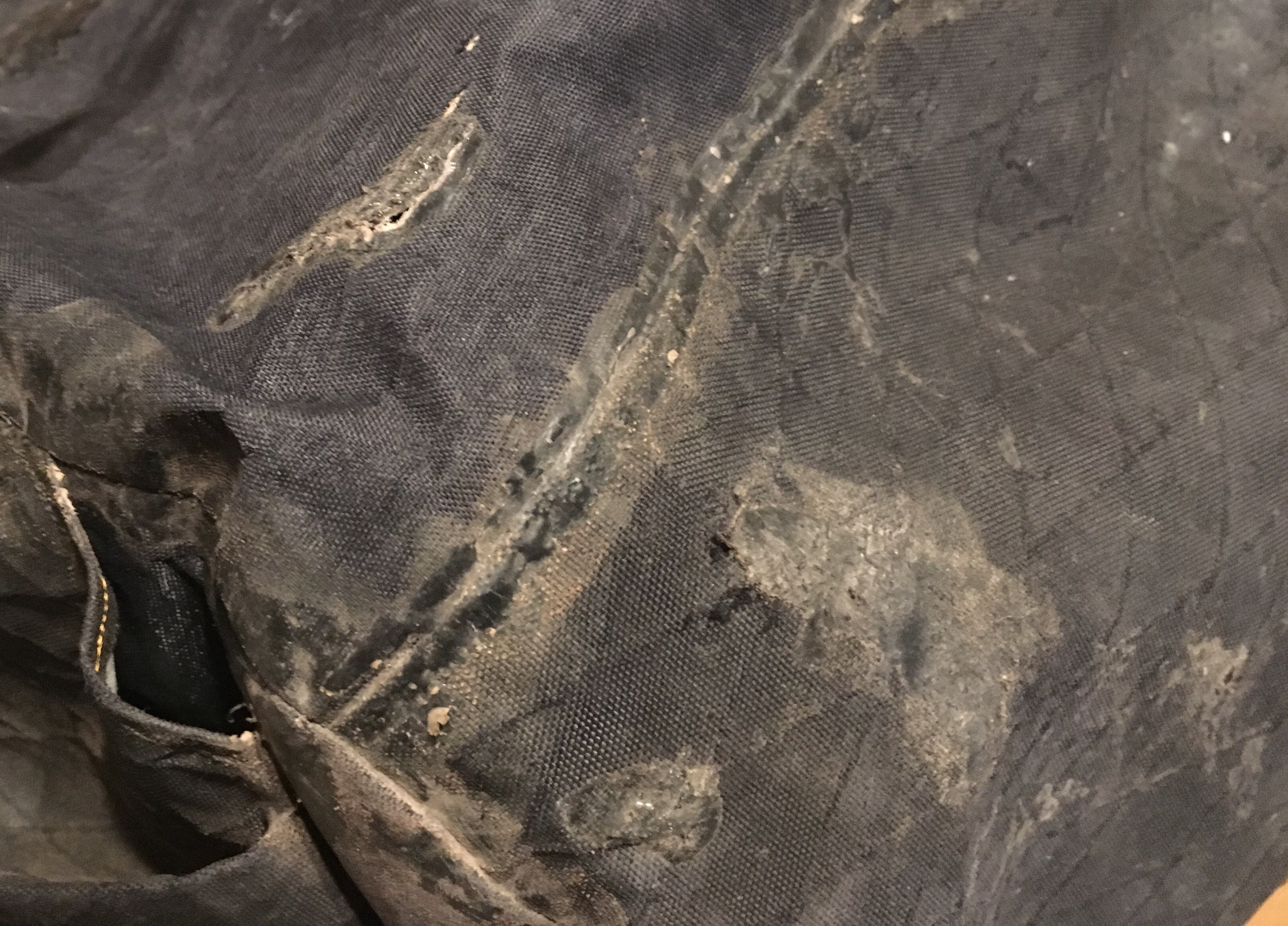 Years have only reinforced my conviction that Cuben/DCF is in backpacks mostly hype.  Yes the 150D hybrid is a very good product.  Yes, good packs are made out of it.  But the face fabric itself is still relatively weak in the face of abrasion, and while the laminate itself is without question stronger in every respect than either PU or any PET I’ve seen, using weight and dollars to put strength there continues to not make sense to me.  200-300D nylon face with a thinner cuben film?  Sounds higher performance in every respect.  Since Cuben was purchased by DSM product development and availability has become decidedly less transparent, so while probably the greatest potential resides there in terms of pure pack fabric technology, I don’t expect anything new, one way or the other.

This leaves us with D-P products, which have become more diverse and vastly more widely available.  Rockywoods, for instance, currently sells 10 variants which could be suitable for backpacks, with more commonly available elsewhere.  Much to their credit, D-P has stuck with their fabric nomenclature, which initially seems obtuse but make discussion and differentiation simple.  For our purposes all fabrics have an inner PET laminate (the waterproof part) and an outer woven face fabric.  The V designation means there is an inner fabric laminated to the PET (easily seen by the white inner), while the X designation means the signature x shaped grid of reinforcing fibers is present, laminated within the PET.  Recent trends have gone away from the V layer, something of which I do not generally approve.  In heavier and especially darker face fabrics this results in a very shadowy interior which makes finding things a pain.  In the lighter fabrics, I’m thinking of X21 in particular, the lack of interior scrim takes away a good deal of stiffness, making an already oddly cut prone fabric considerably moreso.  3 years I was already less than fond of VX21, thinking that VX07 punched better given the weight, and that for me VX42 was almost always preferable.  This is not to say that X21 isn’t a good light pack fabric, just that I put it in the sides of a framebag a year ago, and have grown tired of little nicks appearing for no particular reason.

My particular favorites remain the cordura faces on X33 and X50, though VX42 and X42 are very nice.  The slicker face of the 420D plain weave used the latter does very well in brush and sticks, while cordura is better when dragged over rocks.  VX42 has proven difficult enough to put holes in that I’d use it for anything short of the slot canyon abuse shown above, content that I’d be patching holes and nicks infrequently.  X51 ought to be better than X50, but the difference in size between the warp and weft fibers make it a thorough disappointment.  Here my recommendation has not changed in recent years: VX07 for light trail duty, X33 for most things, and VX42 or X50 for abusive applications. 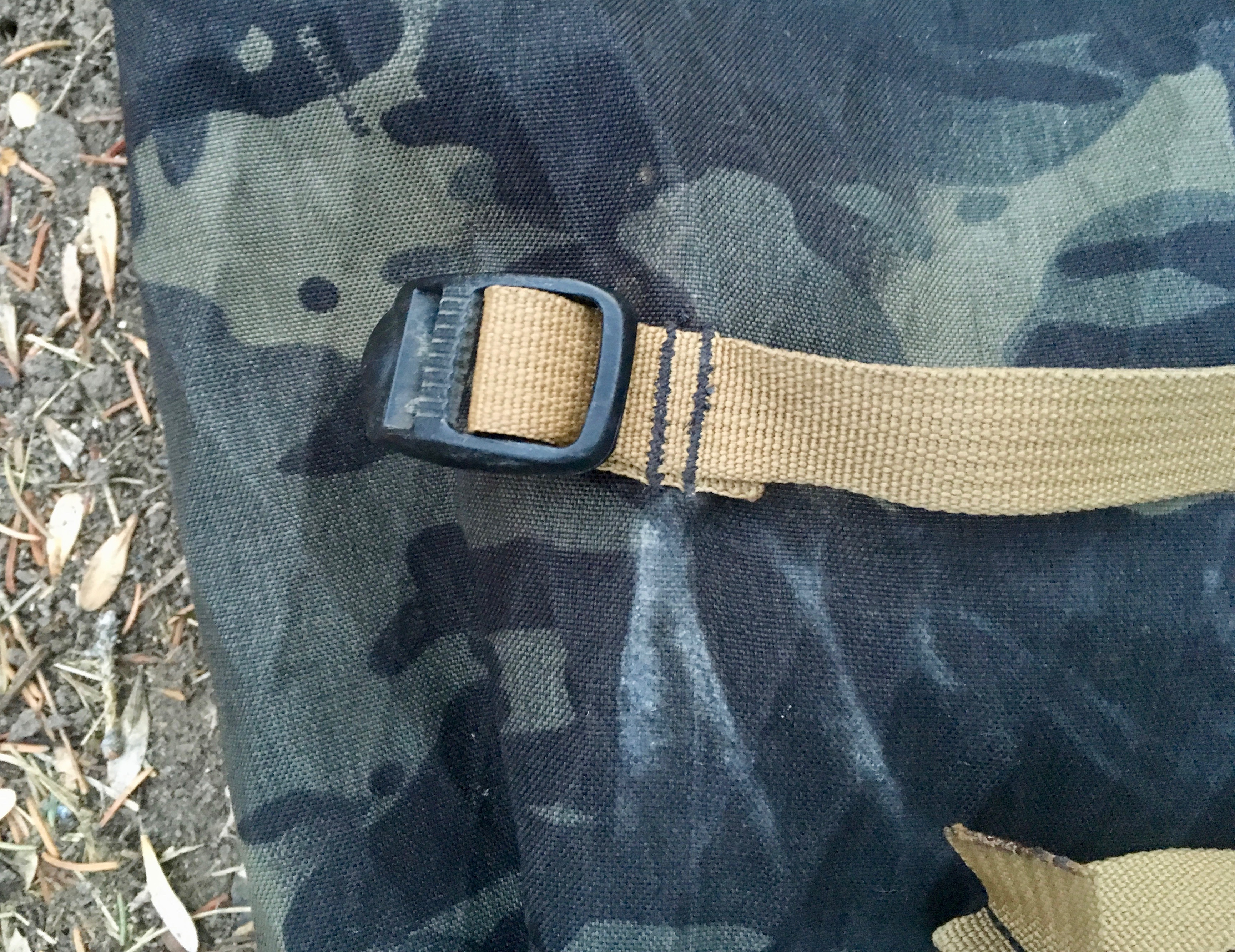 X50 significantly rubbed by 12 miles hauling an elk rack out of the wilderness.  Not overkill in this application.  This also illustrates the way the X grid accelerates abrasion.

A number of areas for improvement are available.  First, more Vspecific fabric options which omit the X grid.  Anyone who has put D-P fabrics to a good test has seen the grid be a major point of abrasion, such that the fabrics would without question last longer without it.  D-P has admitted that branding is at work here, but I also think that packs have become a large enough part of their portfolio that they will shortly be more malleable.   More broadly, it would be swell to see pack fabrics with some manner of durable surface coating that kept them from being saturated under gnarly conditions.  Arc’teryx has done this on a limited basis, so the potential certain exists.

This points to the real future of pack fabrics, which long term is probably in some manner of heavier non-woven.  The woven Dyneema used by Cilogear, HMG, and a few others is impressive, and points towards the way advanced textiles allow traditional fabrics to bend the rules as we know them.  My hope is that fabrics like the Liteskin line from D-P (a non-woven poly face with a woven nylon backer) will out perform traditional fabrics for the same weight, while being less expensive to produce at small and moderate scales than the various dyneema products.